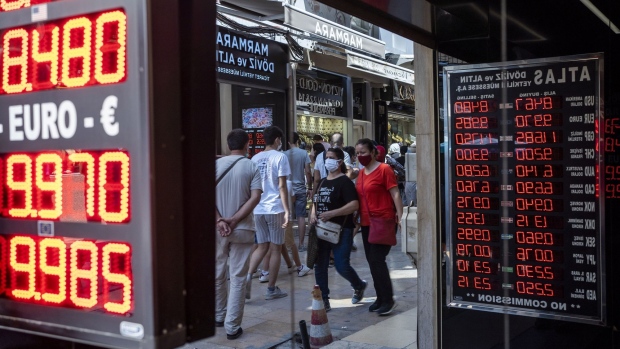 An electronic board displays currency exchange rate information inside the Grand Bazaar in Istanbul, Turkey, on Monday, Aug. 16, 2021. The lira and other Turkish assets gained this week, buoyed by an improved outlook for tourism and the rollout of vaccines. Photographer: Moe Zoyari/Bloomberg , Bloomberg

(Bloomberg) -- Turkey’s central bank told commercial banks to avoid foreign-currency transactions in the early hours of the day when there isn’t demand from clients, according to an official document seen by Bloomberg.

The banks have been carrying out the transactions for their own balance sheets and this has triggered market volatility, the document said. “New measures” will be implemented if lenders continue the transactions, it added, without elaborating.

In a separate document, the central bank told lenders to complete paperwork for foreign-exchange transactions fully and accurately. It also asked banks to state detailed reasons for sending amounts above $50,000 abroad.

The central bank declined to comment on the measures.

In recent months, the central bank has warned banks multiple times to avoid significant foreign-exchange transactions with foreign banks outside of market hours.

The Turkish lira has lost about 29% of its value against the dollar so far this year, and ranks as the worst performer in emerging markets after the Argentine peso.