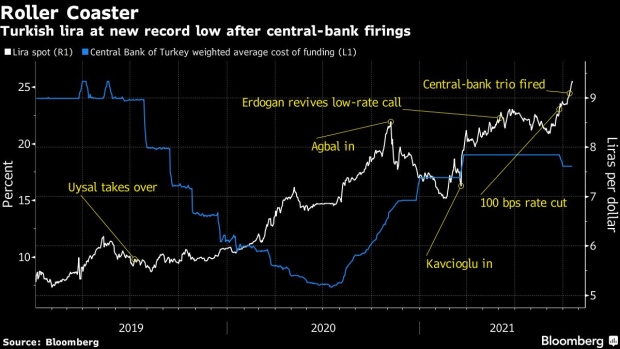 That reduction could come as early as Thursday’s rate decision, after Erdogan rid the monetary authority of policy makers opposed to his calls for lower borrowing costs. All 26 economists surveyed by Bloomberg expect Governor Sahap Kavcioglu to continue monetary easing. While most forecast a reduction of 100 basis points, a sizable minority sees half of that.

A self-described “enemy” of high interest rates, Erdogan espouses the unconventional hypothesis that reducing them will lead to lower inflation. He appointed Kavcioglu in March, replacing hawkish predecessor Naci Agbal after back-to-back rate hikes. Kavcioglu kept policy unchanged for nearly six months before unexpectedly cutting the benchmark rate by 100 basis points to 18% in September, when consumer inflation accelerated to 19.6%.

Last week’s monetary policy committee reshuffle pushed the currency to new lows, extending its losses this year against the dollar to over 20%, more than any other major currency tracked by Bloomberg. That will fuel consumer inflation, which is already running at nearly four times the official target of 5%.

The overhaul also leaves Treasury and Finance Minister Lutfi Elvan in an odd position. Elvan, who has replaced Erdogan’s son-in-law Berat Albayrak and worked closely with Agbal, is widely seen among the very few market-friendly bureaucrats left in the economy’s management.

“Everyone knows that they shouldn’t cut rates further and in fact they should be hiking,” said Piotr Matys, a senior currency analyst at InTouch Capital in London. “A cut has nothing to do with fundamentals, it’s purely a function of political interference,” he said.

“Students of economics will learn about the CBRT for years to come as it will be used as an example to show why it’s so important to have an independent central bank with strong credibility,” Matys said, referring to the central bank by its English acronym.

Despite the lira’s slide since early September, the central bank will likely opt for another reduction by focusing on the slowdown in commercial loans, said Ibrahim Aksoy, the Istanbul-based chief economist at HSBC Asset Management Turkey, who ranks first among forecasters of Turkish rate decisions in two years of Bloomberg surveys. “After the changes at the CBRT, I have revised my cut forecast to 100 bps from 50 bps,” he said.

“The CBRT will probably heed Erdogan’s call for lower rates on Oct. 21. But the speedy decline of the lira might constrain the committee to a 50-basis-point cut, lower than the consensus projection of 100 bps.” ----Ziad Daoud, Bloomberg Economics (Read More: TURKEY PREVIEW: Central Bank to Ease Rates Even as Lira Sinks)

Kavcioglu will update the bank’s base-case scenario for inflation through the rest of 2021 and the following two years on Oct. 28, and answer questions from economists and reporters in Ankara. The central bank currently sees consumer-price growth finishing the year at 14.1%, a more optimistic forecast than the government’s latest estimate of 16.2%.

The statistics agency will publish October inflation data on Nov. 3.