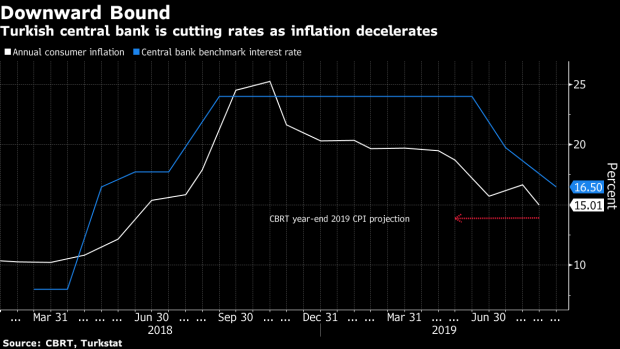 Turkey’s new central banker is striking a balance that could keep both the presidency and markets at bay.

Sent on a headlong mission to lower interest rates by President Recep Tayyip Erdogan, Governor Murat Uysal followed up on his record cut in July with another bold step on Thursday. While bringing easing under his watch to 7.5 percentage points, the Monetary Policy Committee signaled less scope for steeper moves and said inflation is now likely to end the year below its earlier forecasts. The lira soared.

Judging by the response in the currency market, the governor “can bookmark today as a success,” said Simon Harvey, a London-based currency analyst at Monex Europe Ltd. “Uysal continues to walk a tightrope of political pressure, the need to spur economic growth and maintain the disinflationary trend.”

The market jubilation that greeted the 325-basis point cut on Thursday -- 50 basis points deeper than the median estimate in a Bloomberg survey -- came partly out of collective relief. Erdogan over the weekend suggested Turkey would soon cut rates into single digits, spooking traders who started bracing for an outsized reduction.

Ever since Erdogan replaced Uysal’s predecessor for failing to act faster, the fear has been that the president would lean too heavily on the monetary authority in his demands for lower rates, leaving the lira exposed to the kind of selloff that battered the currency last summer.

After all, the economy has only started to make up ground lost during a short-lived recession, and there’s little room left for fiscal stimulus.

While far from defying Erdogan, the central bank also scored points with investors by adjusting its forward guidance to suggest that it was nearing the end of its easing cycle.

“At this point, the current monetary policy stance, to a large part, is considered to be consistent with the projected disinflation path,” the MPC’s accompanying statement read.

For traders, the message carried additional weight given the steep deceleration in price growth that looms as early this month.

Inflation could slip below 10% through October, giving Uysal room to cut rates further but without jeopardizing the real rate on offer.

Still, the governor would need to make good on his pledge to preserve “a reasonable rate of real return” for investors. Turkey’s price growth, currently at 15%, will end the year at 13.9%, according to the central bank’s latest forecast.

“The idea is to keep attractive real yields,” said Guillaume Tresca, a strategist at Credit Agricole. “They will keep cutting, and in the current emerging-market environment it is bearable for the lira.”

That’s probably music to Erdogan’s ears. As the trading day wound to a close, the lira was flirting with its strongest level in a week. It was up 1.5% against the dollar as of 3:02 p.m. in Istanbul, bolstered by the European Central Bank’s latest dovish tilt.

Even so, the next flash point could be just around the corner. Uysal would be wise not to mistake the market’s patience for complacency.

“The stage is set for another confrontation between the market’s tolerance for rate cuts and the central bank’s policy loosening, as inflation is expected to increase toward year-end,” said Phoenix Kalen, a strategist at Societe General SA in London. ‘Its “room for maneuver has greatly diminished, while the scope for policy errors has simultaneously expanded.”