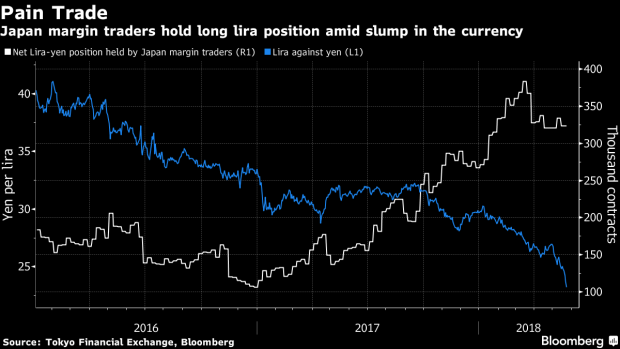 (Bloomberg) -- Add skittish Japanese investors to the list of woes for Turkish assets, as what was once a favored emerging market becomes more like a no-go zone.

With Turkey’s lira breaking below the 24-yen level on Tuesday for the first time, Japanese margin traders cut their losses, said Takuya Kanda, general manager at Gaitame.Com Research Institute Ltd. in Tokyo. The move accelerated Wednesday, sending the lira tumbling in excess of 3 percent against the dollar and pulling down other emerging currencies, including South Africa’s rand and the Indonesian rupiah.

At issue is the proverbial Mrs. Watanabe. Individual investors in Japan have long had the reputation of making bold, contrarian calls -- such as diving into Turkish bonds yielding more than 14 percent, setting aside concerns about double-digit inflation and expanding current-account and budget deficits.

But signs that the Japanese are capitulating are starting to surface in the wake of President Recep Tayyip Erdogan’s comments last week that he intends to take more responsibility for Turkey’s monetary policy if he wins an election next month. He has long called for lower interest rates -- a move that could exacerbate inflation and the lira’s slump.

Japanese margin traders until recently were doubling down on their Turkish bets. They held 323,537 net long positions on the lira against the yen as of May 15, according to data from the Tokyo Financial Exchange. That was up from 266,955 contracts at the end of December.

It’s not been a winning bet. The lira is down 22 percent against the yen so far this year, even worse than its 20 percent tumble versus the dollar. That makes the currency the worst performing of 2018, after only Argentina’s, among 24 emerging markets tracked by Bloomberg.

The lira’s move during so-called witching hour of the Asian morning, when liquidity is typically thin, resembled the slump in the rand on Jan. 11, 2016, that saw that currency drop as much as 9.3 percent against the yen. Margin traders sometimes exacerbate exchange-rate swings through a forced liquidation of positions under loss-cutting rules, Bank of Japan researchers wrote in an August 2016 research paper.

The rand was down 0.5 percent against the dollar, while the rupiah and Mexico’s peso dropped 0.4 percent. Wednesday’s moves mark the latest bout of pressure on emerging currencies triggered by rising U.S. bond yields that are lifting the greenback.

“Markets are picking the winners and losers in terms of the U.S. dollar exposure of which Turkey is one of the vulnerable economies,” said Andy Ji, a currency strategist in Singapore at Commonwealth Bank of Australia.

--With assistance from Lilian Karunungan.

To contact the reporters on this story: Masaki Kondo in Singapore at mkondo3@bloomberg.net;Daisuke Sakai in Tokyo at dsakai2@bloomberg.net

To contact the editors responsible for this story: Christopher Anstey at canstey@bloomberg.net, ;Tan Hwee Ann at hatan@bloomberg.net, Tomoko Yamazaki