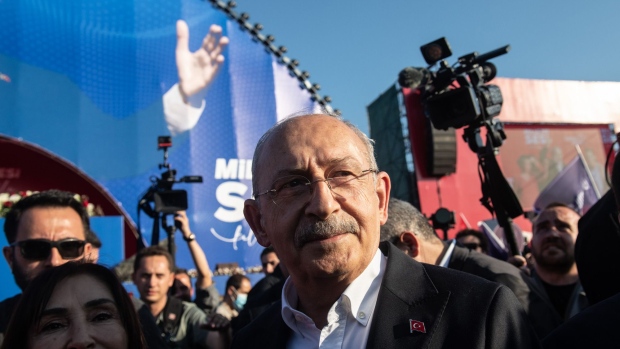 ISTANBUL, TURKEY - MAY 21: Turkey's main opposition Republican People's Party (CHP) leader Kemal Kilicdaroglu greets his supporters during a rally on May 21, 2022 in Istanbul, Turkey. Last week, Turkey's top court upheld convictions and a jail term against leading opposition politician Canan Kaftancioglu for insulting the president and the state. Kaftancioglu heads the main opposition Republican People's Party's (CHP) Istanbul branch and played a significant role in municipal elections in the city that saw the CHP take over the mayoralty, which had been held by President Tayyip Erdogan's AK Party for the last 25 years. (Photo by Burak Kara/Getty Images) , Photographer: Burak Kara/Getty Images Europe

Turkey’s main opposition leader called on the country’s pro-Kurdish party to support a single challenger to President Recep Tayyip Erdogan, in a move to unite opponents of Turkey’s longest-serving leader ahead of elections next year.

“The HDP and left-wing parties are pursuing an alliance for parliamentary elections,” Republican People’s Party leader Kemal Kilicdaroglu said in an interview with Birgun newspaper, referring to the pro-Kurdish party. “It would be more appropriate to field a joint candidate for the presidential elections.”

With roughly 10% of public support in polls, HDP endorsement could add weight to Kilicdaroglu’s six-party Nation Alliance, while a separate candidate could split the opposition vote.

The HDP faces being disbanded by the Constitutional Court over charges including support for terrorism.

Parliamentary and presidential elections are scheduled for June 2023. President Erdogan announced his candidacy as head of the People’s Alliance earlier this month, but the opposition is yet to declare a candidate.

“First we have to put forward our targets -- what we’ll do and how we’ll do it,” Kilicdaroglu said in the interview. “After we agree on those, we can move on to the next phase.”