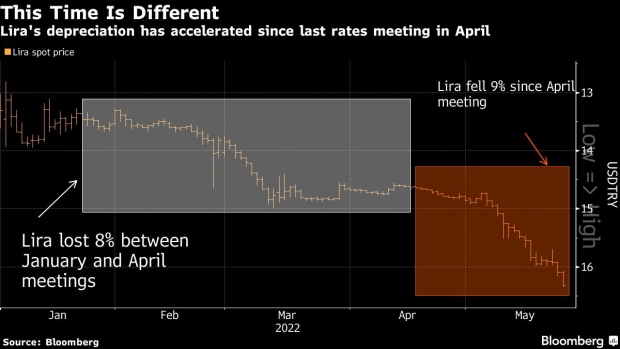 Pedestrians pass by an under-contruction mosque in the Beyoglu district of Istanbul, Turkey on Wednesday, Oct. 9, 2019. The lira hovered near its lowest level since late August against the dollar while stocks and government bonds fell as the threat of U.S. penalties mounted after a Turkish military operation in northeast Syria got underway. Photographer: Kerem Uzel/Bloomberg , Bloomberg

Turkey is set to prolong its unprecedented experiment in monetary policy for another month, though the cost to the lira is increasingly calling the approach into question.

The worst performer in emerging markets this year, Turkey’s currency has weakened more since the central bank last convened in April than during the previous three months combined. Throughout it all, policy makers have bided their time, leaving borrowing costs unchanged at every meeting this year.

Deeply negative rates -- when inflation is taken into account -- are a key driver of the depreciation, alongside a global rally in commodities prices and a drawdown in international reserves. Economists are unanimous that the central bank on Thursday will again keep its benchmark at 14%.

Little relief is in sight for the lira because the central bank remains set on an ultra-loose course. Sahap Kavcioglu, appointed as governor after President Recep Tayyip Erdogan ousted his predecessor for tightening policy too much, has signaled Turkey didn’t need to increase rates just because other central banks are doing so.

Long championed by Erdogan, the belief that higher rates fuel price increases goes against textbook assumptions held by central bankers around the world. The Turkish government is supportive of Kavcioglu’s low-rate policy to boost growth, especially with just over a year left before elections.

“Tightening policy isn’t politically viable, despite all indicators pointing to an economy in need of higher rates. The lira could, again, pay the price for this policy error.”

In place of higher rates, Turkey has relied on backdoor interventions and the introduction of state guarantees for some bank accounts to shield depositors from lira weakness.

Until now, the approach ensured a period of stability. Kavcioglu has said consumer price growth, currently at a 20-year high of nearly 70%, could start slowing as early as June and disinflation will gather momentum at the end of the year.

But inflows into the so-called FX-protected accounts have slowed in recent weeks and the central bank’s reserves are down sharply, leaving it with a small backstop to support the currency. Excluding swaps with commercial lenders and other central banks, Turkey’s net foreign assets have reached negative $63.3 billion, according to Goldman Sachs Group Inc.

The existing policies have also done little to address the causes of a sharp deterioration in domestic confidence that has weakened the lira. As inflation spirals higher, public discontent over the management of the economy is rising.

For investors, Turkey’s standoff with its NATO allies is another drag on the country’s assets. And with commodities prices soaring after the Russian invasion of Ukraine, Turkey’s current account is falling into deeper deficit, further pushing up demand for foreign exchange.

The selloff has by now pushed the lira to the weakest level since a round of rate cuts contributed to its rout late in 2021.

It’s lost over 18% versus the dollar so far this year, depreciating past 16 per greenback and now at risk of reaching 19 by the end of this quarter or soon after, according to Cristian Maggio, head of portfolio strategy at TD Securities in London.

“The dire state of Turkey’s macrofinancial conditions” -- from inflation to the current-account deficit and deeply negative real rates -- “spells disasters to come for the lira,” he said.