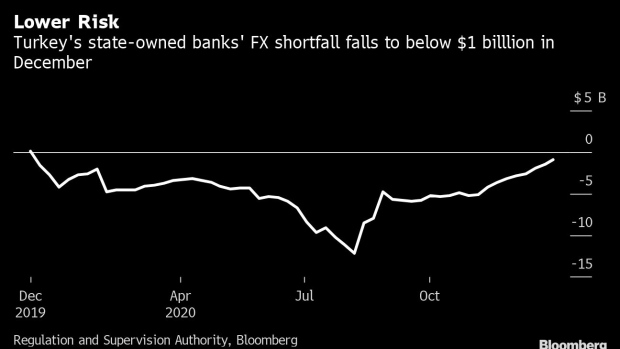 (Bloomberg) -- Turkey’s state-owned banks have slashed the gap between their foreign-currency assets and offshore liabilities in a fresh signal that the government will follow through on pledges to reverse unorthodox policies that caused lenders to take on too much risk.

The shortfall has narrowed to below $1 billion, the lowest level since December 2019, according to data compiled by the industry regulator.

This came as lenders stopped selling dollars and started buying small amounts of greenbacks to reduce the gap, according to four traders, who asked not to be identified because they’re not authorized to speak publicly.

A changing of the guard following the ouster of the central bank governor and resignation of Erdogan’s son-in-law as finance minister has been met with a return to conventional monetary policy tools.

The appointment of Naci Agbal in November to lead the central bank has contributed to a rally in the lira that outperformed its emerging-market peers. He has raised the key policy rate 675 basis points in two months to 17% and pledged more transparency with foreign-exchange auctions and the central bank’s reserves.

“It was indicating a high risk for state lenders when their foreign-exchange shortfall reached $12 billion,” said Haluk Burumcekci, the founder of Istanbul-based independent research firm Burumcekci Research and Consulting. “It’s also positive to see that now we can explain changes in the central bank’s reserves, which was difficult to track when back-door policies were in place”.

Turkey’s regulator allows lenders to exceed the maximum net foreign exchange shortfall of 20% of their capital only six times a year. State banks breached that limit eight times between July and September, according to banking regulator data.