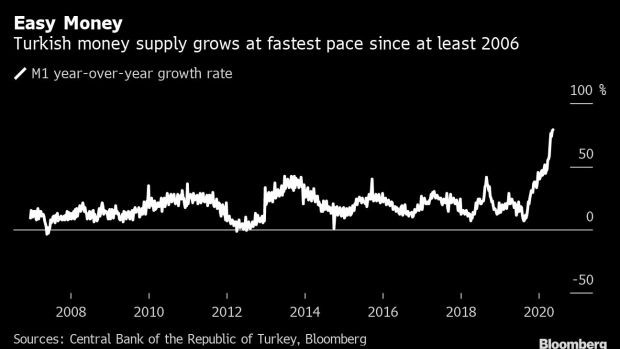 Turkish lira banknotes sit on display in this arranged photograph in Istanbul, Turkey, on Thursday, May 14, 2020. The global demand shock that followed the coronavirus pandemic is exposing a key vulnerability for Turkey’s external finances, with stimulus at home worsening an imbalance between imports and exports while creating another pressure point for the lira. Photographer: Kerem Uzel/Bloomberg , Bloomberg

(Bloomberg) -- Turkish policy makers are pumping money into the economy at the fastest pace in over a decade to contain the fallout of the coronavirus pandemic, a move that risks weakening the currency and stoking inflation.

State lenders are unleashing credit through the economy as the central bank injects liquidity by scooping up government bonds. The money supply, as measured by the M1 gauge -- which includes currency in circulation and bank deposits -- is growing at an annual rate of almost 80%, according to the latest central bank data.

With annual credit growth running at the fastest pace since at least 2007, and the size of the central bank’s bond holdings ballooning, the worry is that the looser financial conditions could leave Turkey’s currency weaker and unanchored, making imports more expensive.

After nine straight interest-rate decreases, the lira already has one of the lowest yields in the world when adjusted for inflation. Data due Wednesday will show consumer-price growth held little changed at an annual 10.87% in May, following two months of declines, according to the median estimate in a Bloomberg survey.

“By forcing the banks to increase lending at such a rapid rate, the authorities may be sowing the seeds of the Turkish economy’s downfall, through a combination of higher inflation, a weaker lira and lower GDP growth,” said Nigel Rendell, a senior analyst at Medley Global Advisors LLC in London. “Strong demand and inevitable bottlenecks in supply will lead to higher prices.”

In a sign that demand for financing is still heating up, Turkish lenders borrowed a record 197.9 billion liras ($29.5 billion) from the monetary authority on Friday. That’s even after the central bank injected the equivalent of $35.5 billion -- or roughly 240 billion liras -- into the banking system through currency swaps this year through April.

The policy maker also bought back 55.8 billion liras worth of government bonds from the secondary market since the beginning of the year, taking its securities portfolio to 71.9 billion liras as of June 1. The stockpile is now equivalent to about 10% of its total assets, the biggest share since 2010, according to Bloomberg calculations.

Still, given the disruptions from the pandemic, a possible annual contraction of 17% in gross domestic product this quarter could slow inflation to single digits by the second half, allowing the central bank to continue easing, according to Carla Slim, a Dubai-based economist at Standard Chartered Plc.