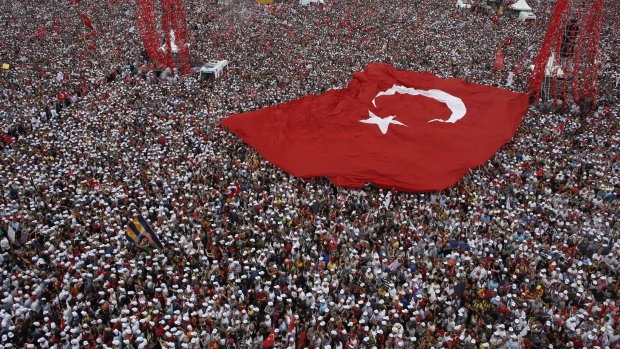 Crowds hold a huge Turkish national flag as Muharrem Ince, presidential candidate backed by the Secular Republican People's Party (CHP), speaks during his last pre-election campaign rally in Maltepe, Istanbul, Turkey, on Saturday, June 23, 2018. Ince, a 54-year-old former physics teacher, addressed what his CHP party claimed was a crowd of 4 million in the Maltepe district on the Asian side of the Bosporus. , Bloomberg

(Bloomberg) -- Turkey on Monday condemned the US’s decision to add Cyprus to a security cooperation program, saying that Washington is losing its impartiality in the dispute surrounding the divided island.

The US move came two weeks after it lifted a decades-old arms embargo on the internationally-recognized Greek Cypriot government located in the south of the Island.

In response, Turkey first pledged to boost defenses of the Turkish Cypriots in the north of the island -- a breakaway republic that’s only recognized by Turkey itself.

On Monday, Turkey’s foreign ministry said the latest US step had no justification and disrupted the balance between the two sides on the island.

“The US has evidently become partial,” it said in a statement.

Tensions over Cyprus come at a time when Turkey and Greece are engaged in a war of words over what Ankara says is a growing Greek military buildup on Aegean islands as well as Western military support to Athens.

Read more: Turkey to Use ‘All Means’ to Defend Its Interests in Greek Spat

The State Partnership Program, that the US added Cyprus to, is a “security cooperation tool, facilitating cooperation across all aspects of international civil-military affairs,” according to the US National Guard’s website. Cyprus will be paired with the New Jersey National Guard for the program, a US Department of Defense statement said.

The Mediterranean island -- less than half the size of New Jersey -- was effectively partitioned in 1963 when fighting erupted between its two main groups: Greek and Turkish Cypriots.

It was fully divided in 1974 after Turkey intervened, capturing the northern third of the island, saying it intended to protect the minority Turkish Cypriots following an Athens-backed coup by supporters of union with Greece.

Read more: The Conflicts That Keep Turkey and Greece at Odds: QuickTake

US National Security Advisor Jake Sullivan met Ibrahim Kalin, the spokesman of Turkish President Recep Tayyip Erdogan, in Istanbul on Sunday, and urged Turkey to seek dialogue and diplomacy to resolve any disagreements in the Eastern Mediterranean, the White House said in a statement.

A spokesman for the Greek government said Prime Minister Kyriakos Mitsotakis would respond positively if Erdogan sought a bilateral meeting in Prague, where leaders of the European Union and other regional countries will meet later this week.