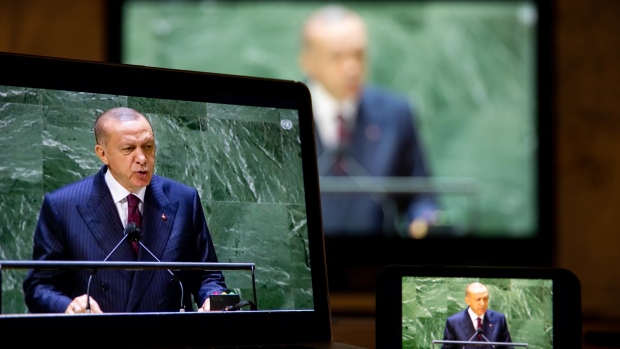 (Bloomberg) -- Turkey, the only G-20 country that’s not yet ratified the Paris Agreement, is preparing to seek parliamentary approval for the accord next month, President Recep Tayyip Erdogan said Tuesday.

Erdogan announced the decision in a speech at the United Nations General Assembly in New York, a move that would end a years-long struggle over absolute emissions reduction targets.

Turkey’s change of heart follows assurances from the U.K., the host of the COP26 international climate change meeting, that ratification of the 2015 accord would not in itself require new financial contributions from Turkey or force it to make specific binding emission cuts or enact specific domestic policies.

Nick Bridge, the U.K’s special envoy for climate change, said after a virtual meeting with Turkish officials in May that Turkey would decide on targets and that the international community could help Turkey to ensure these were “realistic but ambitious,” according to the state-run Anadolu Agency.

“We are one of the first countries to sign the Paris Climate Agreement. However, we have not yet put this agreement into effect due to the unfairness of obligations,” Erdogan told the UN before announcing Turkey’s decision. “We plan to submit the Paris Climate Agreement for the approval of our parliament next month, in line with the constructive steps to be taken and within the framework of our national contribution statement.”

Erdogan’s ruling AK Party has a commanding a majority in the parliament together with its nationalist ally and is aiming to ratify the agreement before the COP26 meeting, which will run from Oct. 31 to Nov. 12 in Glasgow.

“We envisage the ratification phase of the carbon-neutral targeted agreement, before the United Nations climate change conference, which will be held in Glasgow,” Erdogan said.

As of now, Turkey is one of six signatory states that have not ratified the agreement also including Eritrea, Iran, Iraq, Libya and Yemen, according to the UN.

(Updates with date of Paris Agreement in the third paragraph.)