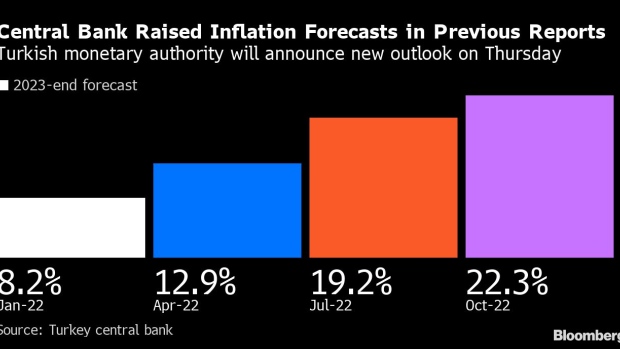 Turkish central bank Governor Sahap Kavcioglu offered no clues about his plans for interest rates in unveiling his first quarterly inflation report of the year.

Days after the central bank added ambiguity to its guidance that suggested it was tilting toward monetary easing, Kavcioglu declined to elaborate on Thursday and only pointed to earlier statements that laid out general conditions for cutting rates.

The governor said policymakers aren’t changing their projections for inflation and still see it ending this year at 22.3% and then slowing to 8.8% in 2024. It’s a marked change from last year, when Kavcioglu had to shift the outlook sharply higher multiple times as Turkey succumbed to its worst cost-of-living crisis in two decades.

“To reduce inflation and achieve price stability on a permanent basis, we implement policies to support production and investments, and to expand our current account surplus capacity,” Kavcioglu said in Ankara.

Turkish inflation slowed sharply in December to an annual 64%, from as high as 85% in the previous months — thanks in part to the statistical effect of a high base in late 2021, when the lira lost nearly a third of its value in a month.

An approaching election has been adding urgency to declare victory over inflation, with President Recep Tayyip Erdogan saying it will continue its “rapid” deceleration and end this year at around 20%.

“The Turkish central bank left its end-2023 inflation forecast unchanged and predicted a sharp disinflationary path for this year. We think that’s an overestimation. Monetary, fiscal and credit policies in place are all inflationary and will likely ensure a shallower fall than the central bank’s outlook, followed by a moderately flat course.”

The governor previously bent policy to Erdogan’s wishes in cutting rates and now settled on what Bloomberg Economics called a “compromise” between the president’s optimism on prices and signs that inflation may end the year at a higher level.

The central bank’s monthly survey of market participants in January showed a decline in inflation expectations but still put year-end price growth at about 32.5%.

For Turkey, as a net oil importer, additional risks ahead include the prospects for energy prices as China reopens its economy and bolsters demand for commodities.

Kavcioglu said the central bank only slightly revised its forecasts for the price of oil as a result of geopolitical risks and now sees it at an average of $80.8 in 2023. Its outlook for food inflation didn’t change from 22% in 2023 and 11.5% next year.

Economists at Goldman Sachs Group Inc., who predict consumer inflation will reach close to 30% by mid-year, said in a report that “although in a standard framework this would not lead to a rate cut, the Turkish central bank could see this as supportive of lower rates.”

Turkey has been defying economic convention by avoiding rate hikes and relying on alternative tools including foreign-exchange interventions and policies that promote the wider use of the lira.

Kavcioglu said there was no longer any basis for high price increases in Turkey and that the slowdown is “supported by core inflation indicators.” The central bank will continue its program of targeted lending, he said.

“We anticipate that the improvement seen in pricing behavior and inflation expectations will continue in the upcoming period in line with our previous inflation forecasts, thanks to the evident contribution of the decisions we have taken within the scope of our policies,” he said.

The Turkish currency is down less than 1% against the dollar so far this year after losing close to 30% of its value in 2022. It still offers deeply negative real yields after Kavcioglu cut the key rate by 500 basis points to 9% last year.

A more stable lira, alongside falling energy prices, is keeping inflation in check, according to Hakan Kara, former chief economist at the Turkish central bank.

But measures including an increase in the minimum wage are driving up demand and tempering the slowdown in inflation, said Kara, who’s now professor of economics at Bilkent University in Ankara.

--With assistance from Patrick Sykes, Baris Balci and Ugur Yilmaz.