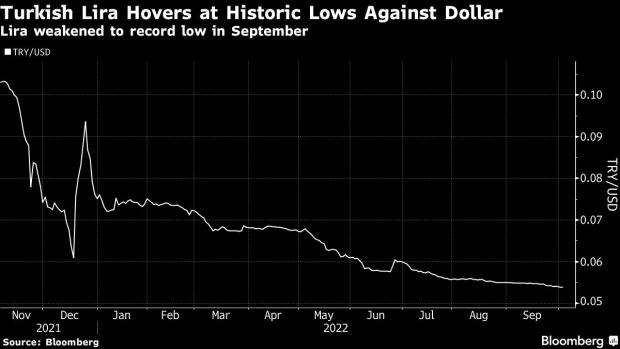 Turkey is set to extend its program to protect lira savings against depreciation until the end of 2023 as it seeks to avoid currency volatility in the run-up to elections slated for next June, when President Recep Tayyip Erdogan hopes to secure another term.

The deputy chairman of the ruling AK Party, Mustafa Elitas, told Bloomberg the proposal would first be shared with key nationalist allies before it’s sent to parliament. Erdogan’s bid for re-election is being hindered by surging inflation that passed 83% last month.

The president unveiled an emergency plan on Dec. 20 to curb the lira’s unprecedented slump in value and protect investors against swings in the currency. One measure guarantees that returns on lira-denominated deposits wouldn’t fall short of bank interest rates, in an effort to end spot demand for foreign exchange.

The program won credit for stabilizing the lira early this year, but it brought a growing cost to the budget and has become less popular as the central bank presses on with an aggressive round of rate cuts.

The local currency has lost more than 28% of its value against the dollar this year. Battered by the central bank’s ultra-loose monetary policy, it’s the worst performer among emerging-market currencies tracked by Bloomberg after Argentine’s peso.

The savings mechanism has cost the government 76 billion liras ($4.1 billion) since March, according to Treasury data. The total amount held in FX-protected deposits was 1.37 trillion liras as of Sept. 23, according to the latest data from the banking watchdog.

Top opposition leader and likely presidential candidate Kemal Kilicdaroglu has been a vocal critic of the program, vowing to scrap it if elected and instead only pay interest on deposits.

Policy makers are following a strategy of encouraging Turks to keep their savings in liras instead of hard currencies. Central bank Governor Sahap Kavcioglu said last month that dollarization was one of the “obstacles” preventing price stability.