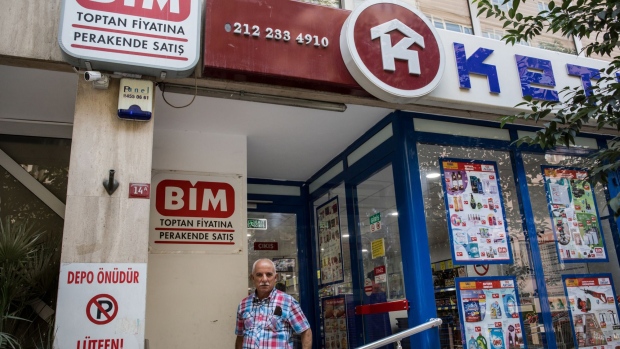 A customer exits a BIM discount supermarket in Istanbul, Turkey, on Wednesday, Aug. 14, 2018. Turkey has slapped an additional tax on imports of a broad range of American goods, the latest escalation in a standoff that’s brought ties between the two NATO allies to a breaking point. Photographer: Nicole Tung/Bloomberg , Bloomberg

The price increases at the five chains “disrupts entire markets,” Erdogan said this week. He also pledged that his government would bring surging prices under control and blamed “opportunists” for rampant cost increases.

The inflation rate rose to 19.3% in August and many Turks are complaining of high prices for essential items including food, rent and electricity. Even with the jump in prices, Turkey’s central bank cut its benchmark interest rate Thursday by 100 basis points to 18%, saying its monetary policy would be based on core inflation, which excludes food and energy prices.