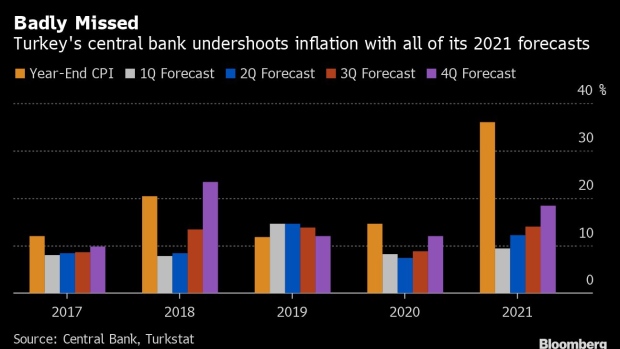 (Bloomberg) -- Turkey’s central bank is set to raise its inflation forecast Thursday after a collapse in the currency pushed consumer price growth to its highest in President Recep Tayyip Erdogan’s 19-year rule.

Under intense pressure from Erdogan, Turkey’s central bank cut rates steeply in late 2021, unleashing an unprecedented rout in the lira, which lost as much as half its value in three months before stabilizing after the government introduced emergency measures in December. The depreciation quickly fed into higher prices, which means the central bank’s existing projections are now outdated.

In the first inflation report of the year, Governor Sahap Kavcioglu will update the bank’s base-case scenario for prices through the rest of 2022 and the following two years, and answer questions from economists and reporters in Ankara.

In its last inflation report in October, the central bank predicted that consumer-price growth would end 2022 at 11.8%. The forecast is far below market estimates with some Wall Street banks predicting last year’s currency crisis could push inflation beyond 50% around the middle of this year.

Government officials have already signaled a significant deterioration in outlook, with Finance Minister Nureddin Nebati telling economists on Saturday that he expects the inflation rate to peak at about 40% in the months ahead and not fall below 30% until potentially the end of the year.

The new projections would typically give investors clues on the central bank’s policy path after it paused this month an easing cycle that saw it slash 500 basis points in four consecutive decisions from September. However, investors have begun to give less weight to official data as monetary policy has become increasingly unpredictable, tethered more closely to Erdogan’s whims than central bank guidance.

Any comment on Turkey’s inflation outlook will be accompanied by an “unavoidably high degree of uncertainty,” said Cristian Maggio, head of portfolio strategy at TD Securities. “Additional currency depreciation, as well lower rates in the future, may further increase the forward-looking peak in consumer prices. Year-end 2022 inflation may come in anywhere between 32-40% under the current circumstances.”

He said earlier this month that interest rates would fall gradually this year and predicted that inflation would be “on the decline” and the lira would strengthen.

The statistics agency will publish January inflation data on Feb. 3.