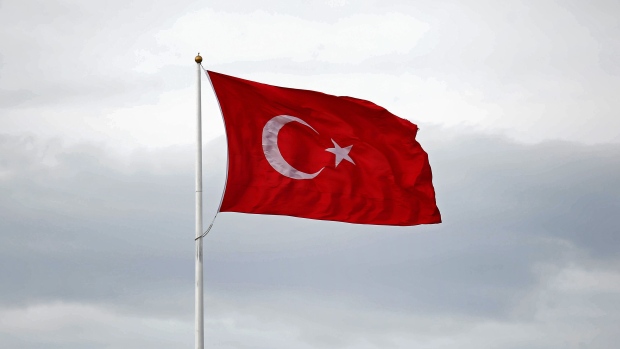 A Turkish national flag flies near the Yavuz Sultan Bridge, also known as the 3rd Bosporus Bridge, beside the Bosporus Strait in Istanbul, Turkey, on Friday, Dec. 1, 2017. The bridge, billed as the world's widest is named after Ottoman Sultan Selim the Grim, known in Turkish as Yavuz Sultan Selim, who ruled in the 16th century, was opened in August 2016 to ease traffic congestion in the city of more than 17 million and links Asia to Europe. Photographer: Kostas Tsironis/Bloomberg , Bloomberg

(Bloomberg) -- Turkey threatened to block any unauthorized search for gas and oil in its economic exclusive zone in the eastern Mediterranean after Cyprus awarded hydrocarbon exploration and drilling rights in its offshore block 5 to a venture of Exxon Mobil and Qatar Petroleum.

A part of the license area in question violates Turkey’s continental shelf in the eastern Mediterranean, the Turkish Foreign Ministry said in a statement just hours after the Energy Ministry in Cyprus announced the deal.

The disputed eastern Mediterranean has become an energy hot spot with big natural gas finds for European Union member Cyprus, Israel and Egypt in recent years, and Turkey’s push to secure a share of the resources has exacerbated strains between historic rivals. The European Commissioned has urged Turkey to sustain de-escalation in the region, while vowing to defend the interests of member states Greece and Cyprus if it didn’t. Turkey was adamant that it’s protecting its rights as well as those of Turkish Cypriots who control the northern third of the divided island.

“Turkey will never allow any foreign country, company or ship to engage in hydrocarbon exploration activities in its maritime jurisdictions,” the Turkish Foreign Ministry said. Turkey accused Cyprus of escalating tensions in the eastern Mediterranean by awarding exploration and drilling rights to the venture.

Offshore gas reserves around Cyprus are especially nettlesome. The Republic of Cyprus is an EU member state and officially has sovereignty over the entire island.

But the island has been effectively divided since Turkey’s military captured the northern third in 1974, following a coup attempt in which a military junta in Athens sought to unite Cyprus with Greece.

The Turkish minority’s self-proclaimed state in the north, the Turkish Republic of Northern Cyprus that’s recognized only by Ankara, lays claim to any energy resources discovered off its coast.

Turkey “will continue to resolutely defend” its rights as well as the Turkish Republic of Northern Cyprus, the Foreign Ministry said.