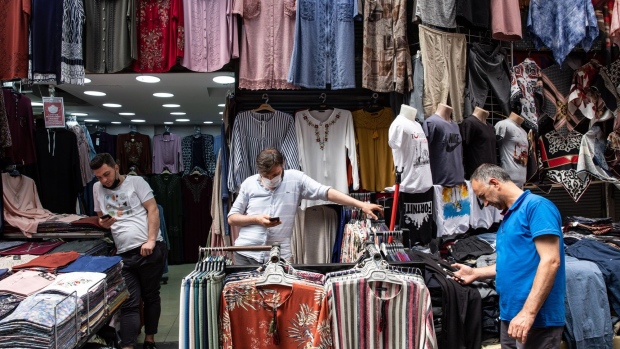 Store owners check their mobile phones outside a clothes store in the Eminonu district of Istanbul, Turkey, on Tuesday, Aug. 11, 2020. A day after the latest call from President Recep Tayyip Erdogan for lower borrowing costs to boost economic growth, the central bank reduced the cheaper liquidity it provides to primary dealers as part of its open market operations to zero from Aug. 12, according to a statement on Tuesday. Photographer: Kerem Uzel/Bloomberg , Bloomberg

(Bloomberg) -- Turkey has approached banks holding a majority stake in the country’s telecom giant to finance a planned buyout of the firm by the nation’s sovereign wealth fund.

The fund, known as TWF, is in preliminary talks with private lenders that jointly hold a 55% stake in Turk Telekomunikasyon AS, according to people with direct knowledge of the matter.

TWF wants to secure a loan from the banks to be able to buy their shares in the telecom company, the people said, asking not to be identified as the talks are private. The stake could be worth around $1.4 billion based on its current market price, data compiled by Bloomberg show.

Negotiations with the banks are ongoing, the wealth fund said in a written statement to Bloomberg, without providing further details. LYY Telekomunikasyon AS, which represents the banks, declined to comment.

Months into the discussions, the latest development suggests the fund may be reluctant to rely on the bond market or use its own cash to finance the transaction.

It would have to agree with LYY on Turk Telekom’s value, the loan size and repayment conditions, the people said. Talks began last month and a deal is possible during the second half of 2022 at the earliest, one of the people said.

Still, the possibility of a resolution to the years-long saga surrounding the ownership structure at Turkey’s second-largest operator is likely a boon to investors.

The shareholder banks, which mostly include local firms, seized the Turk Telekom stake around three years ago after its previous owner defaulted on a multi-billion dollar loan. Akbank TAS, Turkiye Garanti Bankasi AS and Turkiye Is Bankasi AS have the largest exposure and are therefore the biggest shareholders in the special purpose vehicle company.

Turkey’s Treasury and Finance Ministry also owns 25% in Turk Telekom, including a so-called golden share that gives it management control. The wealth fund currently holds 6.7% of the shares and the remainder is publicly traded on Borsa Istanbul.

A deal would mark the biggest step yet in the creeping re-nationalization of Turkey’s telecommunications industry after the wealth fund took a majority stake in the country’s biggest mobile phone operator, Turkcell Iletisim Hizmetleri AS, in 2020.