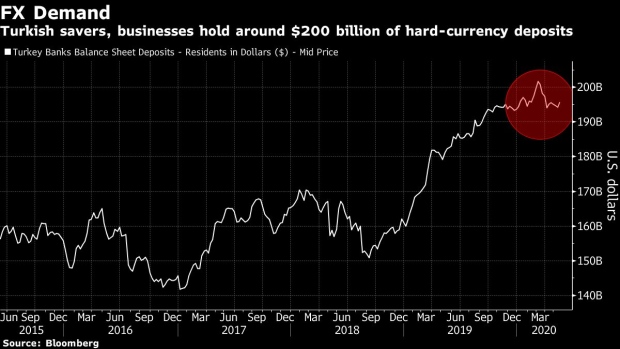 A customer counts 100 U.S. dollar banknotes and 50 euro banknotes inside a foreign currency exchange bureau in the Beyoglu district of Istanbul, Turkey, on Thursday, May 14, 2020. The global demand shock that followed the coronavirus pandemic is exposing a key vulnerability for Turkey’s external finances, with stimulus at home worsening an imbalance between imports and exports while creating another pressure point for the lira. Photographer: Kerem Uzel/Bloomberg , Bloomberg

Turkey will no longer allow investors to set up hedge funds that invest primarily in foreign-exchange assets and will start taxing existing ones, the latest measures designed to clamp down on local demand for hard currency.

The Capital Markets Board said it has suspended approvals for funds whose foreign exchange-denominated securities make up at least 80% of total holdings. The government will impose a 15% tax on the management of such funds, according a presidential decree.

At roughly $3 billion, the size of the funds affected by Wednesday’s measures is relatively small, especially when compared to the $195.7 billion of hard-currency deposits held by households and businesses. But moving to restrict this corner of the market shows authorities are determined to limit the persistent demand for foreign exchange, which threatens to weigh on the lira after it slumped to a record low last month.

The measures also come days after regulators hiked the tax on individual foreign-currency purchases. A string of earlier restrictions effectively banned local banks from trading the lira with foreign institutions by capping the amount they can lend offshore to just 0.5% of their equity.

Critics have argued that the country is edging toward some form of capital controls by limiting the exchange of the Turkish lira. The government has repeatedly denied having such motives.

That would be anathema to many investors after Turkey has maintained one of the most open capital accounts in the developing world. It still relies heavily on foreign inflows to roll over its obligations.

For local savers, holding foreign currency is a way to hedge against the depreciation of the lira and deposit rates that don’t compensate them for inflation.

Data on Wednesday showed annual price gains unexpectedly accelerated to 11.4%, while the median estimate in a Bloomberg survey of economists predicted little change from the previous month.

Turkey’s push for faster credit growth and cheaper money has pushed the average rate lenders offer for one-month lira deposits to 7.3%, the lowest level since 2013.