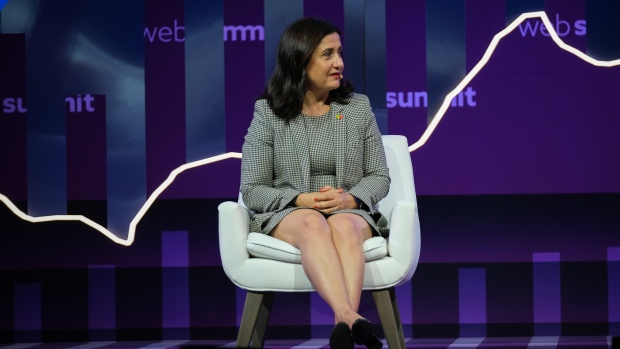 Christine Ourmieres-Widener, chief executive officer of TAP Air Portugal, during a session on day two of the Web Summit in Lisbon, Portugal, on Tuesday, Nov. 2, 2021. The Web Summit runs from 1-4 November. , Bloomberg

Turkish Airlines has “made no attempt at investing in an international airline,” the Istanbul-based company said in a regulatory filing Monday, adding that media reports suggesting it will do so “have no basis in fact.”

Turkey’s national carrier was responding to a report from Portuguese newspaper Jornal de Negocios saying it was looking at acquiring a holding in TAP and had outlined an offer close to 1.9 billion euros ($2.1 billion).

Portugal’s government regards TAP as a strategic asset because its flights link a global diaspora of the country’s citizens -- including the biggest transatlantic network serving Brazil -- and also connect the mainland to the Madeira and Azores archipelagos in the middle of the Atlantic.

TAP spokesman Andre Serpa Soares declined to comment on the newspaper report. Portugal’s Ministry of Infrastructure and Housing has received no information about Turkish Air’s possible interest in TAP, a spokeswoman said.

Portugal’s Infrastructure Minister Pedro Nuno Santos has said the government doesn’t rule out future partnerships between other airlines and TAP, which is unusual among European flag carriers in not having been absorbed into one of the region’s three big network-airline groups.

Portugal is still waiting to get European Commission approval for TAP’s restructuring plans. Like other carriers, the Lisbon-based firm received rescue loans from the state to help it survive the coronavirus crisis.