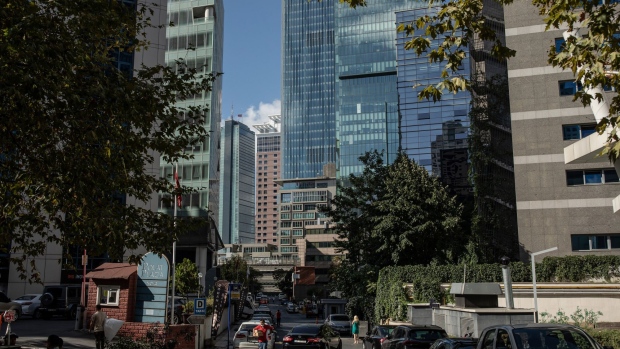 Commercial office buildings stand on a street in the Levent district of Istanbul, Turkey, on Wednesday, Sept. 16, 2020. Turkish bank stocks, hardest hit by a selloff of Istanbul equities from foreigners, are trading at a record discount to local industrial sectors. Photographer: Nicole Tung/Bloomberg , Bloomberg

The Banks Association of Turkey is in talks with state lenders to improve their capital to help boost loans as President Recep Tayyip Erdogan presses for looser monetary policy to spur growth and create jobs, local media reported.

The Turkish banking industry is “strong and solid” in terms of capital adequacy and non-performing loans ratio, the association’s head Alpaslan Cakar was cited as saying in an interview with a local TV channel.

He said lenders will “take responsibility in some way” to support Erdogan’s economic model, which relies on banks giving out loans that will eventually transform into investments and employment.

Total profit at Turkish banks in the January-October period rose to 66.1 billion liras ($4.8 billion) from 50 billion liras in the same period a year earlier. The average non-performing loan ratio was 3.5% in October, down from 3.97% the previous year, while the average standard capital adequacy ratio was about 17%.