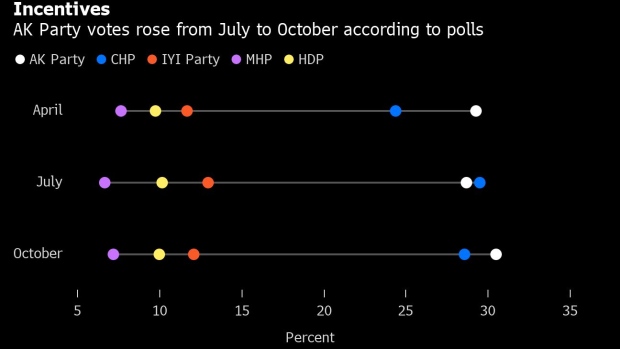 Turkish national flags for sale at a souvenir store in the Mahmutpasha Bazaar in the Fatih district of Istanbul, Turkey, on Tuesday, Sept. 20, 2022. Key Turkish banks are buying back shares after stocks reversed an unprecedented rally last week, providing relief for brokerages hit by the rout. Photographer: Erhan Demirtas/Bloomberg , Bloomberg

(Bloomberg) -- Turkish banks are offering the world’s cheapest loans, but they are only available for a select few.

That’s because policymakers want to avoid a currency crisis while maintaining strong economic growth ahead of elections next year, where President Recep Tayyip Erdogan seeks another term.

Regulators are forcing commercial lenders to prioritize exporters and smaller businesses that count for nearly three-quarters of the job market.

New lira loans for smaller firms -- a key group targeted for credit growth -- rose nearly 10-fold on an annual basis during the first 10 months of this year, compared to a seven-fold increase for large corporates, according to the central bank.

Businesses that don’t fit the government’s image of worthy borrowers, including those rich in foreign currency, are struggling to secure cheap credit, even as rates were slashed to 9% on Thursday despite inflation at 85%.

Curtailing lending in this way could dent growth projected to reach 5% this year.

“Only exporters with little import needs can get loans, which is only a handful of people,” said Eren Gonul, a sales manager at an Ankara-based furniture maker.

Gonul said his business -- like many others -- did not aim to grow because they would need to take out loans at elevated costs in order to import more raw material, an expensive move with the lira at record lows.

“Lending rules aim to promote exports without fueling inflation. Caps on lending rates already pose an obstacle to lending appetite, and clashes with other policies will further limit these policies’ success. The upcoming Treasury-backed credit guarantee fund is sure to spur demand, and feed into inflation.”

Banks can either offer cheap loans to high-priority clients or lend at higher costs to others. The latter, though, requires them to buy a large amount of government debt to be parked at the central bank. That leaves little incentive to lend to second-tier clients.

The impact became more pronounced after Turkey started lowering interest rates in August in line with Erdogan’s demands. The key objective is to avoid a sharp drop in the lira that followed past periods of rapid growth in loans.

The financial engineering underway is enabling credit growth without derailing the lira. But banks are wary of risks from taking on large amounts of government debt with long maturity.

“Erdogan learned from the experiences of 2018 and 2020,” when explosion in loans boosted imports, inflation and eventually resulted in a weaker currency, said Nick Stadtmiller, emerging markets director at Medley Global Advisors in New York.

The fine-tuning is a key part of Erdogan’s game plan to keep markets stable ahead of next year’s presidential vote.

Growing discontent over price pressures makes it paramount to anchor the lira. But Turkey is running low on net foreign reserves, and a rate hike to defend the currency in the case of another rout is hardly a choice, since that could cause a recession right before the elections.

Policymakers are thus pushing for “selective lending,” a practice that allows only some of the Turkish businesses to benefit from falling interest rates. The so-called small-to-medium sized enterprises borrowed a record $35 billion this year, accounting for nearly half of all commercial loans, according to the central bank.

The average cost of commercial loans fell from 30% in July to around 16% last week, following four rounds of rate cuts.

But selective lending stopped that from translating into another boom and, instead, credit growth dropped from this year’s peak in June.

Regulations that saddled lenders with a large amount of low-yield government debt are causing an outcry among bankers.

The central bank told banking executives that they shouldn’t expect a reversal in policies until after the elections, according to people familiar with the matter.