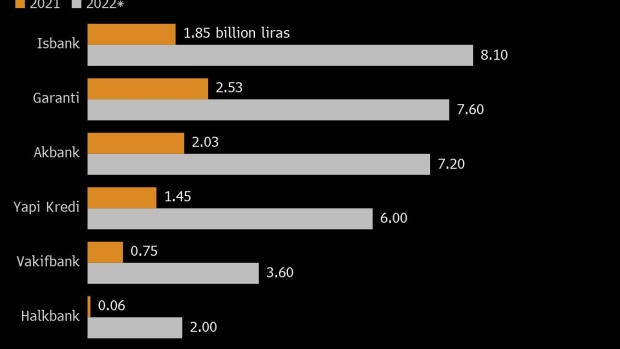 Passengers ride a ferry to the European side of Istanbul, Turkey, on Monday, Aug. 16, 2021. The lira and other Turkish assets gained this week, buoyed by an improved outlook for tourism and the rollout of vaccines. Photographer: Moe Zoyari/Bloomberg , Bloomberg

(Bloomberg) -- Turkish lenders are expected to announce record profits for the first quarter after the central bank’s policy of cutting interest rates in the face of inflation helped boost their margins.

Listed lenders Akbank TAS, Turkiye Garanti Bankasi AS, Yapi Kredi Bankasi AS and Turkiye Is Bankasi AS are set to triple or quadruple their earnings in the first three months of 2022 compared to the same period last year, according to median estimates of five analysts surveyed by Bloomberg.

State-owned peer Turkiye Vakiflar Bankasi TAO may report an almost 380% surge in net income for the first quarter, while profit at Turkiye Halk Bankasi AS could jump 3,000% from a year earlier, the Bloomberg survey showed.

Banks’ profits have already more than quadrupled to 39 billion liras ($2.7 billion) in the first two months of the year, according to official data. That’s a consequence of the monetary experiment Turkey embarked on last year by cutting policy rates even amid inflation, reflecting President Recep Tayyip Erdogan unorthodox argument that high interest rates fuel inflation.

The policy is creating a borrowing opportunity for banks, who saw their net interest margins widen as they continued to lend out at higher rates to businesses and consumers. High inflation also boosted their earnings from bonds linked to consumer prices and led to faster loan and fee growth in nominal terms.

“We now expect earnings to grow around 150% in 2022 on average,” HSBC Holdings Plc banking analyst Cihan Saraoglu wrote in a report. The earnings outlook would drop dramatically if the central bank were to bring policy rate closer to inflation, he said.

Turkey’s benchmark banking index rose by more than a quarter over the past month, outpacing a 14% advance for an index comprised of industrial companies.

That rally means even record-breaking profits in the first quarter may not push bank shares much higher, according to Blooomberg Intelligence analyst Tomasz Noetzel. The rally “already discounts expectations of strong 1Q results,” he said. “Policy makers’ efforts to tame inflation will be key for foreign investors, which have returned to Turkey at the beginning of April.”

Earnings season for Turkey’s banks starts on April 27 with Akbank, followed by Garanti Bank and Yapi Kredi in the following two days.