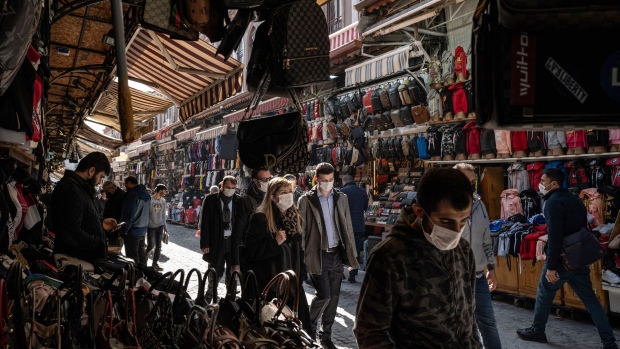 Pedestrians walk through a a busy retail street close to the Grand Bazaar in Istanbul, Turkey, on Wednesday, Feb. 2, 2021. Turkish inflation quickened for a fourth month as the lingering impact of a weak lira led to a broad-based rise in prices. Photographer: Nicole Tung/Bloomberg , Bloomberg

(Bloomberg) -- Turkey’s statistical institute is winding down two advisory boards established last month to boost transparency by tapping the expertise of academics, economists and non-governmental organizations on prices and employment.

Turkstat called board members to notify them of its decision, people with direct knowledge of the matter said on condition of anonymity. They did not give a reason.

The Turkish agency responsible for publishing key economic figures established the boards in February in a move widely applauded as an effort to shore up the credibility of official data that’s been questioned by economists and investors in recent years. The boards had included some economists critical of government policy.