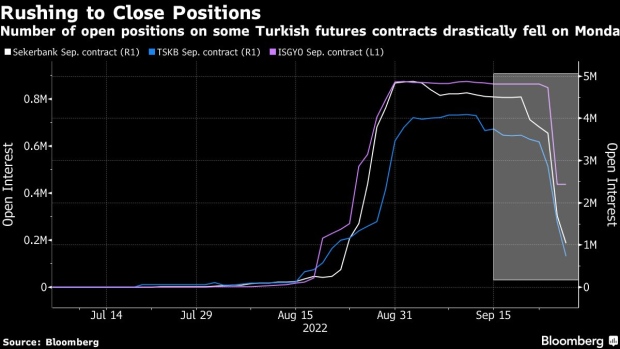 Customers use automatic teller machines (ATM) at a kiosk in the Beyazit district of Istanbul, Turkey, on Tuesday, Sept. 20, 2022. Key Turkish banks are buying back shares after stocks reversed an unprecedented rally last week, providing relief for brokerages hit by the rout. , Bloomberg

(Bloomberg) -- Turkey’s regulator has asked local brokers to take measures to limit volatility in the nation’s stocks ahead of the expiration of September contracts in the futures market, which has daily traded volume of about $2 billion.

Brokers have closed contracts on some of the stocks in the recent rout with the most open positions, a step meant to avert what could have been a highly volatile expiration day for Turkish markets on Sept. 30. That’s according to a broker and a senior official with knowledge of the matter who spoke with Bloomberg on Sept. 27.

In addition, Takasbank, the Turkish custodian bank, took over some shares in three companies as collateral while providing liquidity to brokerages for the closure of positions in return, according to an exchange filing Thursday.

Open positions on September contracts for Sekerbank Turk AS, Turkiye Sinai Kalkinma Bankasi AS, and real estate developer Is Gayrimenkul Yatirim Ortakligi AS fell by 81%, 76%, and 51% respectively this week after staying near the highest level on record during the rout, according to open-interest data collected by Bloomberg. Open positions are trades which expose the investor to market movements, and are capable of generating profits or losses until closed out with an opposing trade.

Those stocks were seen as the biggest concern by analysts as their steep drop still continued in the spot market even as the heat of the selloff was mostly over for other bank stocks, posing problems for brokerages. Authorities have started reviewing transactions in the market from the past 12 months and agree that some market moves are disruptive, the official said.

Turkish brokerages and capital markets regulators have held several meetings since last week to ease the fallout for securities firms. Before reaching the deal, authorities first asked brokerages to secure enough funding to close their positions.

Brokerages also purchased the shares arbitrage funds were holding in the spot market, taking the current trading loss on their own balance sheet. It was unclear how large those losses may be.

“That has led to liquidity problems arising for the brokerages,” said Iris Cibre, director of Sasa Capital JSC. “Therefore Takasbank took over some of the shares in order to provide liquidity, supporting the brokerages who are carrying these stocks and losses on their balance sheet.”

“Takasbank has now eliminated the risk of a potential default by some brokerages as it extends credit to them,” she said.

Turkish bank shares suffered one of their biggest blows in the two weeks through Sept. 26 as they fell 38%, the decline fueled by higher margin calls that threatened some brokerages’ financial stability. The rout came after an unprecedented rally in just two months, during which trading in futures and leveraged markets played a key role.

While the deal has now eased some of the pressure, the market will not be entirely out of woods until all contracts are cleared and settlement runs smoothly on Oct. 4, the official said, adding that it hinges on brokerages acting on authorities’ demand to make additional funding available on the day of settlement.

“Nevertheless, what needs to be done next is crucial as both Takasbank and the markets regulator need to recuperate their skills to act fast at such times,” Cibre said.

Borsa Istanbul Banks Index was trading 1.3% higher as of 2:25pm in Istanbul. The gauge is down 0.1% this week so far, finding some stability after plunging in the previous two weeks. TSKB halted a 13-day decline and rose 3.4%.