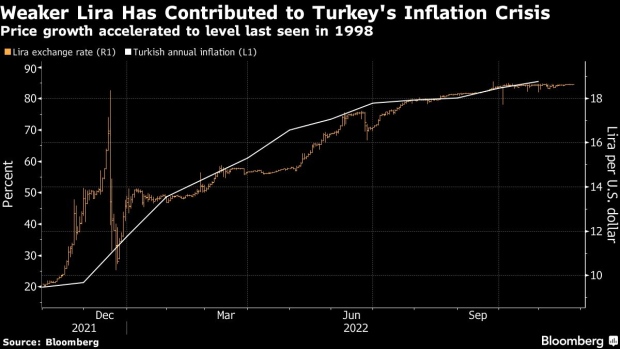 Turkey’s central bank said it’s ending its monetary easing cycle, bowing to a call by President Recep Tayyip Erdogan to take interest rates into single digits by the end of the year.

The Monetary Policy Committee lowered the benchmark to 9% from 10.5%, matching the forecasts of all analysts surveyed by Bloomberg. The lira was little changed after the decision on Thursday.

The MPC said in a statement “the current policy rate is adequate and decided to end the rate-cut cycle that started in August.”

The central bank led by Governor Sahap Kavcioglu also said additional measures “supporting the effective transmission” of monetary policy would be implemented. A person familiar with the matter told Bloomberg such measures could be announced as early as Thursday.

“Prices will not fall as much as the central bank expects despite the coming favorable impact of base effects, and eventually the currency may implode again, pushing both inflation and rates higher,” he said.

The move was to fulfill Erdogan’s explicit call for single-digit rates. “So that justifies them calling the end of easing right now.”

The fourth straight cut underscores Turkey’s extreme outlier status during a year that’s seen the world’s most aggressive and synchronized monetary policy tightening in 40 years in response to inflation shocks.

Turkey has done the opposite, guided by Erdogan’s unconventional belief that lower rates have the power to cool inflation. Before the latest decision, the central bank had slashed its benchmark by 350 basis points since August despite price growth that’s exceeded 85% and will likely end the year as the second-highest in the Group of 20 after Argentina.

Erdogan has wielded greater power over the central bank since 2018, firing all three of Kavcioglu’s predecessors for taking a line he deemed insufficiently dovish. But his sway became even more evident this year as he pressed for lower rates to turbo-charge the economy ahead of elections by promoting cheap loans.

The president hasn’t backed down even with annual inflation now 17 times higher than the official target and the fastest since he took power two decades ago.

The central bank expects price growth to end the year at about 65%, a more upbeat assessment than the view of many economists. Last month, Kavcioglu conceded that “we cannot count ourselves as successful in lowering inflation.”

“An equally-sized easing cycle in 2021 resulted in a currency crisis and pushed inflation to the 24-year highs seen this year. Aiming for a different outcome this time, the bank will press on with alternative tools such as securities maintenance, targeted credit policies, and reserve requirements. This will be a tall order, as loose monetary policy and expansionary fiscal policies in the lead-up to the elections will further fuel price gains.”

To spare the economy and the currency further damage, authorities are encouraging targeted lending that tilts the allocation of cheap capital toward exporters and investment-oriented firms.

While the costs of the ultra-loose approach are mounting, the central bank has been propping up its gross reserves that have grown to their highest this year and are set to rise further by the end of this month. They rose to $123 billion through the week of Nov. 18, according to central bank data on Thursday.

Still, the lira has depreciated almost 29% against the dollar this year, the worst performer in emerging markets after the Argentine peso.

TURKEY INSIGHT: Rate Cuts Speed Up Currency Intervention to $98B

“It will be very very hard to contain USDTRY spikes with this backdrop. Very hard, and very costly if and when especially market optimism recently instigated by US inflation starts pulling back,” said Maggio.

--With assistance from Harumi Ichikura and Tugce Ozsoy.