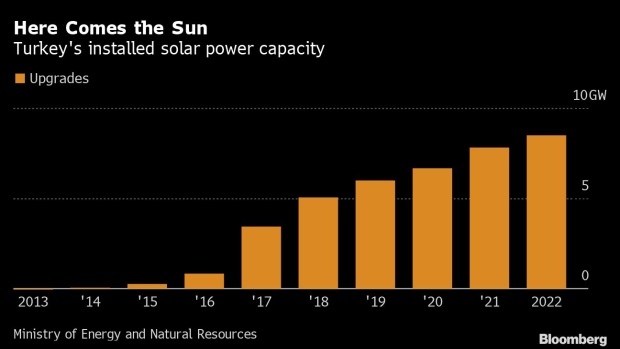 New plants still may increase by about 30 percent this year as the cost of solar energy drops to near the rate consumers pay for power from the national grid in some of the sunniest parts of California and Turkey. , Getty Images

(Bloomberg) -- A record number of Turkish companies are installing solar systems to avoid soaring electricity costs caused by a collapse in the currency and a spike in global energy prices.

“Companies made $110 billion-worth of investment applications for renewable energy production,” he was quoted as saying.

Demand for solar power in Turkey has been booming since last year after a combination of higher gas prices and a plunge in the currency saw electricity bills for companies quadruple.

Turkey imports gas used to generate much of its power so, as the lira has weakened, the costs have risen. Russia’s invasion of Ukraine in February compounded the problem as supply worries pushed up global energy prices.

Turkey allows businesses to produce electricity from renewable alternatives for their own use but earlier this month simplified a process that also enables them to sell their surplus power to the grid.

That incentive has given the market a new boost.

“We expect our annual energy costs to decline by $90 million by 2025, when all of our solar energy projects will be complete,” he said.The number of small solar plants, run by companies for their own needs, has exploded from little more than 1,000 in 2017 to more than 9,000 today. Overall, Turkey’s installed solar capacity has risen from virtually nothing a decade ago to about 9 gigawatts, enough to power millions of homes.

Affordable green financing options offered by banks have also given renewable energy a boost at a time when many businesses are struggling to secure loans for other projects.

“There is a boom in solar energy investments for self-consumption with manufacturing companies surpassing energy firms,” Garanti BBVA Chief Executive Officer Recep Bastug said at a recent conference. “The number of healthy companies turning to this alternative has increased and financing these demands is our priority.”

“From big hotels and manufacturers to hospitals, many businesses build rooftop or field systems to avoid energy costs,” said Halil Demirdag, head of the Turkish Solar Energy Industry Association and Chief Executive Officer of solar panel producer Smart Enerji. “Most of the plants that are being built aim to meet this” demand.