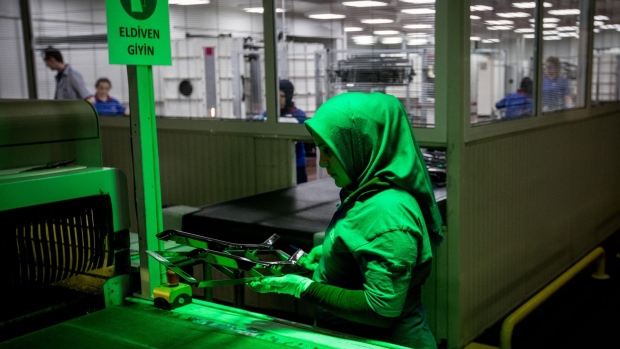 MANISA, TURKEY - MAY 14: A Vestel employee works on a production line in the Vestel City mega factory on May 14, 2018 in Manisa, Turkey. The Vestel City mega factory started operations in 1984 and is now one of the largest industrial complexes in Europe it is comprised of nine factory buildings over a total of 1.1 million square feet and employs more than 16,000 staff using the latest robotic technology to produce more than 87,000 products a day. The complex produces consumer electronics, white goods, LED lighting, digital products and smartphones primarily focused at European markets. Vestel has been the leading exporter in electronics in Turkey for the past 20 years and currently exports to 155 countries. Despite the Turkish lira at a record low against the dollar and analysts warning Turkey is heading for an economic crisis, exports to the EU increased in March by 18.2% compared to the same month last year. (Photo by Chris McGrath/Getty Images) , Getty Images

Turkish manufacturers’ confidence in the economy has plunged the most since the 2008 global financial crisis, the first key piece of data reflecting the coronavirus’s toll on local businesses.

The government has shut down almost 200,000 businesses to try to slow the spread of the virus, while announcing a slew of financial aid measures to keep companies from cutting jobs, including tax cuts and payment deferrals.