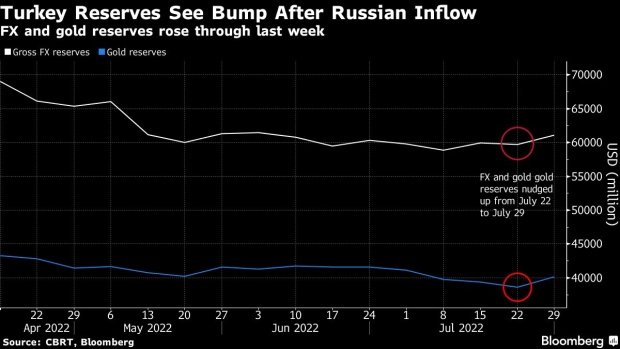 Kocatepe Mosque, center, surrounded by commercial and residential buildings in Ankara, Turkey, on Tuesday, May 31, 2022. Turkey’s inflation soared in May to the fastest since 1998 as it came under more pressure from the rising cost of food and energy while ultra-loose monetary policy contributed to currency weakness. Photographer: SeongJoon Cho/Bloomberg , Bloomberg

Turkey’s official reserves rose the most since February, following a cash injection by Russia’s state-owned nuclear corporation Rosatom into a Turkish subsidiary.

Russia Is Wiring Dollars to Turkey for $20 Billion Nuclear Plant

Turkey’s total gross reserves rose by around $3 billion through last week, with gold accounting for $1.6 billion of the increase and foreign exchange for the rest. Gross FX reserves stood at $61.1 billion and gold at $40.2 billion, according to data published by the Turkish central bank on Thursday.

Treasury and Finance Minister Nureddin Nebati said in a TV interview earlier this week that reserves were rising thanks to hefty transfers from another country without saying which one. His recent policy mix underscores how Turkey is juggling competing financial priorities.

While the central bank tries to boost reserves at a time of a widening gap in foreign trade, it also needs to keep supporting the lira. That means policy makers must maintain unannounced currency interventions, a drain on FX holdings that leaves little visibility on the future of reserves despite foreign transfers like the one from Russia.

The central bank in Ankara declined to comment when asked about the exact origins of the transfers.

Nebati said Wednesday night that reserves would keep rising over the next few weeks with foreign transfers.

Turkish officials told Bloomberg last month that Russia’s Rosatom Corp. was in the process of transferring $15 billion to a Turkey-based subsidiary building the $20 billion Akkuyu nuclear plant on the Mediterranean coast.

Any Turkish bank receiving the cash would be able to lend those dollars to the central bank via swaps or part at the monetary authority under the so-called depot mechanism.

The central bank has been regularly borrowing foreign currency from commercial lenders through FX-lira swaps since 2019. The total amount received through the mechanism reached $59 billion, according to monthly central bank data, last published in June. Such swaps allow commercial lenders to park some of newly received funds at the monetary authority, which in return lend liras to banks.

The central bank has clinched a slew of currency swap agreements with the likes of China, Qatar, South Korea and the United Arab Emirates since 2012 to boost its reserves.

Turkey’s foreign holdings came under pressure since it began back-door interventions to support the lira under ex-Finance Minister Berat Albayrak in 2019. President Recep Tayyip Erdogan said early last year that such interventions amounted to around $165 billion, defending the strategy as key to financing a deficit in the current account and meeting Turkey’s obligations at a time of capital outflows.

Bloomberg Economics estimates that country intervened by as much as $66 billion in the currency market so far this year to support the lira.

Still, the lira lost around a quarter of its value in 2022, bringing total losses in the last three years to 70%.