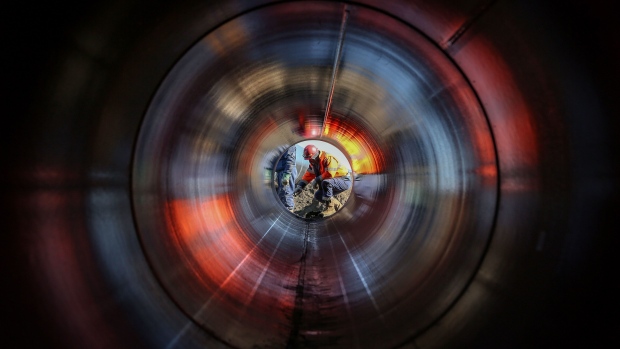 A construction worker inspects a section of the TurkStream natural gas pipeline operated by Gastrans, a joint venture of Srbijagas JP and Gazprom PJSC, at the gas supply landing site in Zajecar, Serbia, on Tuesday, Jan. 14, 2020. Serbia’s economic growth accelerated in the second half of 2019, fueled by construction of a pipeline to ship Russian gas via Turkey and Bulgaria, as well as higher public and private spending as the nation heads into an election year. Photographer: Oliver Bunic/Bloomberg , Bloomberg

Turkey may be able to start with initial annual production capacity of 3.5 billion cubic meters of gas in 2023, Donmez told Bloomberg News in an exclusive interview in Ankara, Turkey’s capital. The aim would be to increase that to about 15 billion cubic meters annually within four years of first production, roughly one quarter of the European Union’s output today.

State-run energy company Turkiye Petrolleri AO plans to drill 40 wells over four phases in the Sakarya field, which is estimated to have recoverable gas reserves of about 540 billion cubic meters. President Recep Tayyip Erdogan has touted the find -- the biggest ever in the Black Sea -- as a boost to Turkey’s $765-billion economy. He has promised to start production in 2023, the centennial of the founding of modern Turkey, in a bid to boost his re-election campaign the same year.

The government has no plans to invite international oil companies to operate fields because state-run Tpao has the technical capacity to do it alone, Donmez said. Turkey is conducting seismic studies before it starts drilling another exploratory well in a prospective area to the west of the Sakarya field during the first half of next year, he added. Tpao will be targeting a similar geological formation that was found some 4,500 meters (15,000 feet) beneath the seabed in the original discovery.

Similar work is underway also in Turkey’s own economic exclusive zone in the Mediterranean Sea, Donmez said. However, there have been some political disputes as Turkey has explored for gas in waters also claimed by European Union states such as Greece and Cyprus and signed a maritime boundary deal with Libya in 2019.

Turkey aims to cut its annual energy bill of around $44 billion by reducing its reliance on imports, which currently account for nearly all of the country’s gas consumption. Domestic gas demand is expected surge by a quarter to reach 60 billion cubic meters this year, due to lower hydropower production amid dry weather and rising coal prices, Donmez said.

The government and gas importers, including state-owned pipeline operator Botas International Ltd., are now in talks with Russia for a possible extension to a long-term supply contract for 8 billion of cubic meters of gas before the agreement’s expiry in December.