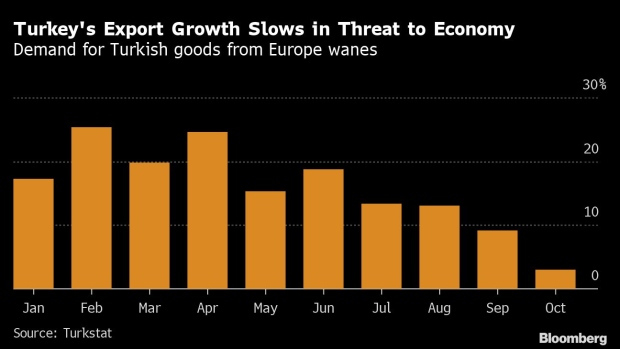 A vendor stands in an elevated position on his clothing stall in Istanbul, Turkey on Wednesday, Nov. 16, 2022. Turkey is contending with the worst cost-of-living crisis for decades, with food prices up 99% and energy bills rising by another 20%, all in a country where half the population has to survive on the minimum wage. , Bloomberg

Turkey’s economy fared worse than forecast as it grew at the slowest pace since a contraction at the height of the global pandemic in 2020, a downswing likely to alarm President Recep Tayyip Erdogan ahead of elections next year.

Data on Wednesday showed gross domestic product expanded an annual 3.9% in the third quarter, still among the best performances in the Group of 20 but well below the predictions of most analysts surveyed by Bloomberg. It’s also a steep deceleration from the prior three months, when GDP expanded a revised 7.7%.

While the loss of momentum helps explain the urgency behind the central bank’s shock resumption of interest-rate cuts in August, the unorthodox approach is also feeding inflation that’s increasingly taking a toll on the economy. When adjusted for working days and seasonal variations, GDP shrank 0.1% in the third quarter from the previous three months.

Erdogan, Turkey’s longest-running leader who’s up for re-election next year, has championed an economic model that prioritizes exports, production and employment at the expense of price stability and the currency. The president has pressured the central bank to lower its benchmark into single digits, a goal it reached at a meeting last week by bringing the key rate to 9%.

In comments on Twitter after the data release, Treasury and Finance Minister Nureddin Nebati said Turkey’s approach is paying off and vowed the government will stick with its “employment-focused policies.”

But the four back-to-back rate cuts have so far failed to give much impetus to the $800 billion economy. Businesses and consumers are also proving less immune to the ravages of inflation following a post-pandemic spurt that saw Turkish economic growth exceed 6% every quarter for two years.

“Even with easing growth, inflation will remain a bigger concern for the economy. The central bank’s loose monetary policy stance will take a toll on the currency and feed back into inflation. We see expansionary policies in the lead up to the mid-2023 elections boosting demand and adding to price gains.”

Tight controls on lending and the highest inflation in the G-20 after Argentina have started to weigh on private capital spending.

Alongside net exports, which had a negative impact of 1.5 percentage points, one of the biggest drags on growth in the third quarter came from investment as measured by capital formation, said Erkin Isik, chief economist at QNB Finansbank in Istanbul.

A plunge in the lira is among reasons for annual price growth approaching 86%, a level not seen in more than two decades. The Turkish currency, which fell nearly 10% against the dollar in the third quarter, traded little changed after the data release on Wednesday.

While household finances are coming under pressure, consumer spending has stayed resilient enough to power the economy last quarter. Some shoppers likely brought forward purchases in anticipation that inflation will eat into their disposable incomes.

Erdogan’s goal of hitching the Turkish economy to a boom in exports is also at risk as the threat of recession looms in Europe, its biggest trading partner. In a disappointing start to the fourth quarter, sales of Turkish goods abroad expanded only an annual 3% in October, down from more than 9% the previous month.

It’s a sign that Turkey’s ability to sustain growth in the months ahead will hinge on stronger domestic demand and business investment.

The government is likely to look at various measures to revive the economy ahead of elections that should be held by June. A much-anticipated increase in the minimum wage, expected to be announced in December, may provide households with a extra breather against inflation.

“A positive surprise came from government expenditures,” he said.