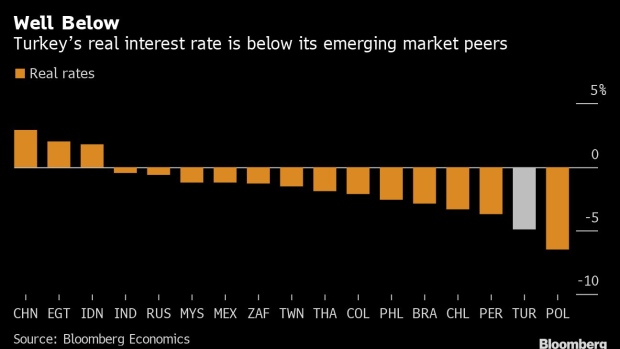 (Bloomberg) -- The slump in the lira and higher oil prices likely pushed Turkish inflation higher for a sixth consecutive month in November, with no let up in sight as President Recep Tayyip Erdogan vows to pursue lower interest rates at all costs.

Data due Friday will show consumer prices rose an annual 20.70%, up from 19.89% in October, according to the median estimate in a Bloomberg survey of nine economists. That’s more than four times the central bank’s target of 5%.

Facing falling support in opinion polls ahead of 2023 elections, Erdogan has embarked on a full-throttle push to expand the economy and create jobs by demanding the central bank reduce borrowing costs. The monetary authority has cut the benchmark by a total of 4 percentage points since September to 15% at a time when peers are considering hikes as they emerge from pandemic restrictions.

A climb in consumer inflation in November will further push Turkey’s real yield into negative territory, a major problem for a country dependent on foreign capital. The lira has lost almost 40% of its value against the dollar this year.

“There is only one thing that can stop this development and at some stage turn it around -- and that is aggressive rate hikes” that are sustained “until inflation is firmly on a downward trajectory,” said Henrik Gullberg, a strategist at Coex Partners.

“But to do that you also need to accept weaker domestic demand and hence much weaker growth. Something that is unlikely to be tolerated.”

“To stabilize the lira interest rates will need to increase by 700-800 basis points. That would bring policy back into line with historical norms and global benchmarks. But if inflation races further ahead, it may call for even more aggressive tightening.”

Erdogan’s strategy -- the president has long held the unorthodox belief that higher interest rates fan prices rather than curb them -- risks leaving Turkey with higher borrowing costs and inflation over the longer term. On Thursday, he replaced his finance minister, the latest purge of officials who disagree with the direction of monetary policy.

In October, the central bank raised its year-end inflation estimate to 18.4% from 14.1%.