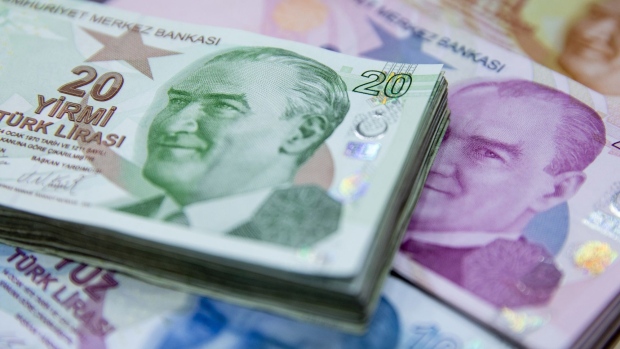 A pile of 20 Turkish lira banknotes sits alongside other denomination banknotes on the counter of a currency exchange bureau of Istanbul, Turkey, on Tuesday, Aug. 11, 2020. A day after the latest call from President Recep Tayyip Erdogan for lower borrowing costs to boost economic growth, the central bank reduced the cheaper liquidity it provides to primary dealers as part of its open market operations to zero from Aug. 12, according to a statement on Tuesday. Photographer: Kerem Uzel/Bloomberg , Bloomberg

(Bloomberg) -- The Turkish lira extended gains to over 15% against the U.S. dollar, after President Recep Tayyip Erdogan announced extraordinary measures to bolster the currency late Monday.

Erdogan’s government announced measures including the introduction of a new program that will protect savings from fluctuations in the local currency. The government will make up for losses incurred by holders of lira deposits should the lira’s declines against hard currencies exceed interest rates promised by banks, Erdogan said after chairing a cabinet meeting in Ankara.

Prior to Monday’s rebound, the lira had lost about half of its value against the U.S. dollar since September, with declines gaining pace after Erdogan last month unveiled an economic model that relies on lower borrowing costs and a cheaper currency. Erdogan has said Islam demands lower rates.

The central bank has slashed the one-week repo rate by five percentage points since September, in line with Erdogan’s demands. The monetary authority has also intervened in the foreign-exchange market four times this month to stop the currency depreciation.