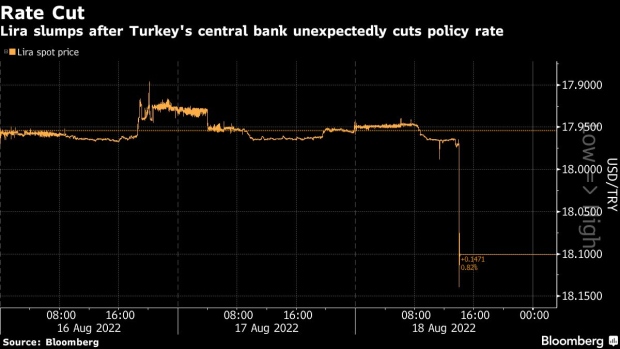 An electronic board displays exchange rates information outside a currency exchange bureau in Istanbul, Turkey, on Thursday, April 21, 2022. Turkish inflation soared to a fresh two-decade high in March, leaving the lira increasingly vulnerable by depriving the currency of a buffer against market selloffs. Photographer: Erhan Demirtas/Bloomberg , Bloomberg

The shock decision by Turkey’s central bank to cut interest rates against a backdrop of soaring inflation surprised analysts and economists, who expect further intervention in currency markets as pressure builds on the lira again.

Policy makers lowered the benchmark rate to 13% from 14% on Thursday, where all 21 economists surveyed by Bloomberg had predicted rates would remain unchanged. The central bank had previously stood pat on borrowing costs at its last seven meetings.

Turkey’s five-year credit default swaps added 33 basis points, rising to the highest since Aug. 3. The Borsa Istanbul 100 Index rallied after initially dropping as much as 1.9% after the decision, trading up 0.4%.

Emre Akcakmak, senior consultant to East Capital, based in Dubai: