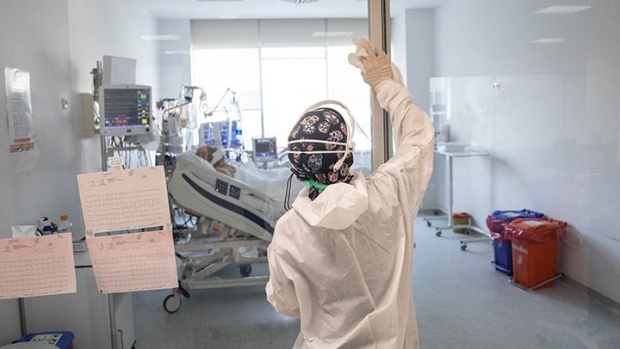 ANKARA, TURKEY - OCTOBER 05: A medical worker disinfects the outside of a COVID-19 patients room at the Ankara City Hospital, Intensive Care Unit (ICU) on October 05, 2020 in Ankara, Turkey. As coronavirus cases continue to rise around the globe, Turkey is also seeing a new rise in cases as it goes through a second peak of the first wave of the virus. Ankara, the nations capital has the highest number of confirmed cases in the country according to figures from the health ministry. In a recent press conference Health Minister Fahrettin Koca acknowledged that the daily coronavirus figures published by the health ministry are not including asymptomatic people, causing fears to grow around the true number of cases across the country. Turkey was recently removed from the UKs safe travel list adding to further hardship for the tourism industry and the economy. According to figures released by the Johns Hopkins University the number of global confirmed cases is 35,238,623 including U.S. president Donald Trump and first lady Melania Trump who both tested positive for the virus. (Photo by Chris McGrath/Getty Images) Photographer: Chris McGrath/Getty Images Europe , Getty Images

(Bloomberg) -- Turkish medical equipment suppliers are set to publicly rebuke the government over what they say is an unpaid bill of about 6.5 billion liras ($770 million).

“Public and university hospitals haven’t been paying us for the past 18 months,” Erkin Delikanli, vice chairman of the Federation of All Medical Equipment Producers and Supplier Associations, said by phone Tuesday.

Officials have blamed budgetary constraints, saying payments can be made in November at the earliest, according to Delikanli. The federation, an umbrella organization for nine professional associations, plans to make a public statement on Sept. 16.

The row between medical suppliers and the government has rumbled on for years but burst into the open in 2020 when U.S. Ambassador David Satterfield said money owed to international companies alone exceeded $2.3 billion, threatening the country’s access to critical equipment.

Health expenditures have risen sharply since 2018 due to consecutive routs in the lira that saw the currency lose more than half its value, and more recently the pandemic.

In an attempt to resolve the stalemate, the government proposed a combination of a haircut for suppliers and extended periods of repayment lasting as long as three years, drawing the companies’ ire.

Delikanli said lira depreciation is the main reason behind the payment issue, though the coronavirus “may also have changed priorities.”