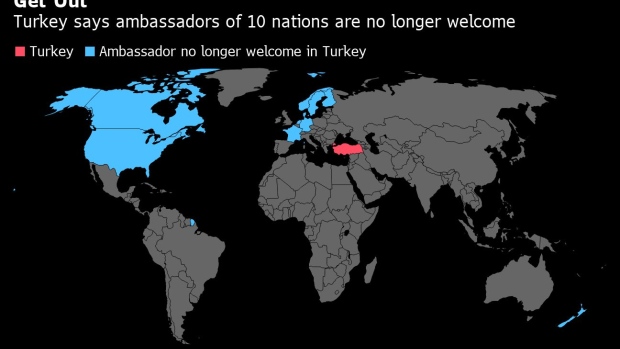 (Bloomberg) -- Recep Tayyip Erdogan’s administration is weighing options to avoid formally designating ambassadors from 10 countries, including the U.S. and Germany, personae non gratae, after the Turkish president risked a major rift by describing them as no longer welcome.

Senior advisers have briefed the presidency on the possible fallout on Turkey’s economy and the lira should the government take a step that would effectively result in the envoys being ordered out, according to officials with direct knowledge of the matter.

The Man Behind Erdogan’s Worst Spat With the West: QuickTake

The currency weakened to fresh lows against the dollar on Monday amid fears that the Foreign Ministry will follow through with a formal designation. On Saturday, Erdogan said a joint statement by the ambassadors demanding that imprisoned businessman Osman Kavala be released was a direct interference in national affairs and the judiciary.

“I gave the necessary orders and told our Foreign Ministry to quickly take care of declaring these 10 ambassadors personae non gratae,” Erdogan said in a televised speech.

Lira Drops to Record After Erdogan’s Threat Against Envoys

Holding back would avoid a further deterioration in ties with the U.S. and Germany, Turkey’s largest trade partner, officials briefed Erdogan’s office. Those deliberations have so far prevented the Foreign Ministry from making an official announcement on the envoys, the officials said, asking not to be identified discussing private meetings taking place ahead of Monday’s cabinet meeting to be chaired by the president.

The lack of a formal decision has left the U.S., Germany, Denmark, Finland, France, the Netherlands, Sweden, Canada, Norway and New Zealand in the dark over the fate of their ambassadors in Ankara, Turkey’s capital.

A U.S. official said the government in Washington is aware of the reports and is seeking clarification from Turkey’s Foreign Ministry.

The latest diplomatic flare-up centers on businessman and philanthropist Kavala, who has been jailed for four years in a case that’s become a test of the independence of Turkey’s judiciary and the rule of law in the eyes of some foreign governments.

The spat puts Erdogan in an awkward position just days before a Group of 20 nations summit takes place in Rome, where the Turkish president is hoping to talk with U.S. President Joe Biden.

No meeting has been confirmed yet and a new diplomatic crisis over the diplomats -- should they be expelled -- will hardly make it easier for Erdogan to get the face time he needs to negotiate solutions to earlier problems plaguing bilateral ties.

Erdogan wants to lobby Biden to allow Ankara to buy dozens of American warplanes, in a bid to overcome Washington’s resistance to major arms deals with Turkey following its controversial purchase of Russian air defenses.