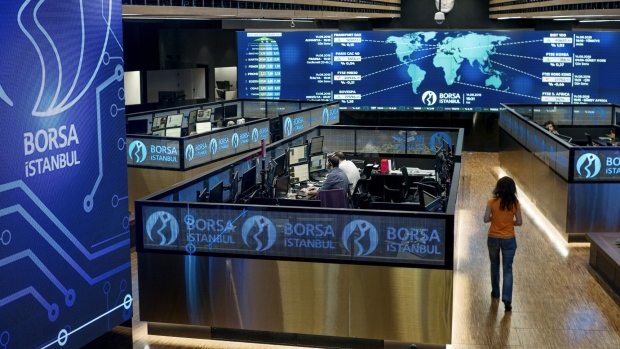 Employees work in their booths at the Borsa Istanbul SA stock exchange in Istanbul, Turkey, on Tuesday, Aug. 14, 2018. While they are growing more critical, the underlying tone of warnings from businesses has so far been supportive of the government in principle, showing there are limits to how much Turkey’s billionaires are feeling emboldened to speak out after elections in June increased President Recep Tayyip Erdogan’s grip on power. Photographer: Ismail Ferdous/Bloomberg , Bloomberg

“Small investors are being robbed,” Kemal Kilicdaroglu, leader of the Republican People’s Party, said at a speech in Izmir on Friday, without detailing his claims. He urged the Capital Markets Board to “carry out its duty” and “wipe out manipulators.”

Turkey has no plans to intervene in the stock market, a senior official told Bloomberg on Sept. 20, a day after regulators held a meeting with brokerages. Still, authorities have started reviewing transactions in the market from the past 12 months and agree that some market moves are disruptive, the official said.

While some shares have stopped their declines, others continue to slump. Sekerbank has lost 52% since Sept. 14, while TSKB plummeted 60% from Sept. 6 and Isbank’s REIT unit Is GYO is down 47% since Sept. 15.

Analysts said the stock-market plunge was triggered by hotter-than-expected US inflation data and the Akbank pension foundation’s selling of 8 million shares. It quickly spiraled as some institutions faced margin calls, which occur when investors are required by brokerages and regulators to add equity at times of sizable market moves.

Turkish bank stocks have been supported this year by factors including strong earnings expectations and the slashing of interest rates despite 80% inflation. Yet the magnitude of the rally has left many analysts questioning whether fundamental analysis was enough to explain such moves.

“I know all those who robbed small investors by name” and they will be held to account, Kilicdaroglu said.