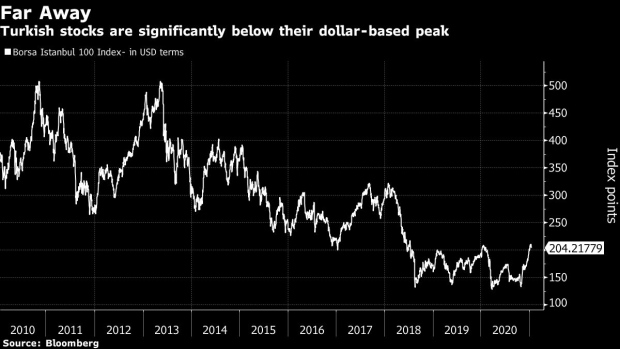 Employees work in booths at the Borsa Istanbul SA stock exchange in Istanbul, Turkey, on Tuesday, Aug. 14, 2018. While they are growing more critical, the underlying tone of warnings from businesses has so far been supportive of the government in principle, showing there are limits to how much Turkey’s billionaires are feeling emboldened to speak out after elections in June increased President Recep Tayyip Erdogan’s grip on power. Photographer: Ismail Ferdous/Bloomberg , Bloomberg

(Bloomberg) -- Even after their stellar rally, Turkish stocks have plenty of room to extend their gains, say investors and strategists. The rate of ascent may just be slower.

Following the longest winning streak in 11 years, last week’s 1.5% retreat in the benchmark Borsa Istanbul 100 Index was tipped by some as the start of a pull back. In fact, investors should seize on dips like those as buying opportunities, said Semih Kara, chief investment officer at Istanbul-based money manager Tacirler Portfoy.

“Corrections are healthy and they’re unlikely to be extensive for Turkish equities this time,” said Kara, whose equity-intensive fund had the best return among its peers last year. Kara does acknowledge that the market is unlikely to keep up with the breakneck speed of its 40% jump since the start of November.

Turkish stocks surged after President Recep Tayyip Erdogan’s decision to replace the central bank governor with an old ally, the resignation of his son-in-law as economy czar, and back-to-back interest-rate hikes. Those moves spurred optimism among investors that the country had adopted a more conventional monetary policy path, prompting foreigners to purchase $1.95 billion of Istanbul equities.

The market is still attractive, especially if investors focus on quality stocks like Coca Cola Icecek AS and white-goods manufacturer Arcelik AS, said Ekaterina Iliouchenko, a Frankfurt-based fund manager at Union Investment Privatfonds GmbH. With the prospect of reopening economies and a relatively more predictable central bank, “the rally has further room to run, but it will be more about stock picking from here,” she said.

By some measures at least, there appears to still be good value in Turkish stocks. Despite its heady gains, Istanbul’s benchmark index is at a 52% discount to the MSCI Emerging Market Index, compared with an average of 45% over five years. What’s more, due to the lira’s slide in recent years, the BIST 100 Index, trading near its all-time high, is still well short of its record level in U.S. dollar terms.

The deep discount to emerging-market peers suggests investors are likely to tolerate, if not actually overlook, risk factors such as the “sticky inflation” that has kept consumer price gains at almost triple the Turkish central bank’s target, Yapi Kredi Invest analysts including Murat Berk wrote in a Jan. 14 note.

Still, investors will be sensitive to any developments around the pandemic and the progress in vaccines that has driven the global risk rally, and they will be watchful of Turkish monetary policy, said Anastasia Levashova, a fund manager at Blackfriars Asset Management in London.

It’s inevitable that some will take profit after the rally, but others will switch out of harder-hit emerging markets such as South Africa and Latin America in favor of Turkey, China and Russia where medical systems are better and economic damage from the virus is less severe, she said.

At least one bugbear of 2020 lingers for some investors: Erdogan last week resumed his criticism of high interest rates and their impact on Turkey’s economy, and reiterated his unorthodox view that higher borrowing costs are responsible for inflation.

Erdogan’s long-held beliefs on monetary dynamics resulted in his decision to fire two central bank governors in as many years since assuming vast new presidential powers in 2018, derailing local markets and hurting confidence in the economy.

“To buy the market here requires a giant leap of faith on behalf of the fund manager on the evidence of two months of relatively conventional monetary policy after years of ineptitude and economic mismanagement,” said Julian Rimmer, a London-based emerging markets trader at Investec Bank Plc. “If it were purely a function of a change in the personnel, then this would be easier to believe, but President Erdogan’s economic model is still intact.”

“Erdogan’s anti-rates comments should be seen as rhetoric now, given the damage caused by the previous policies,” he said. “The overhaul in top economy management was necessitated by the economic conditions, and those haven’t changed much.”