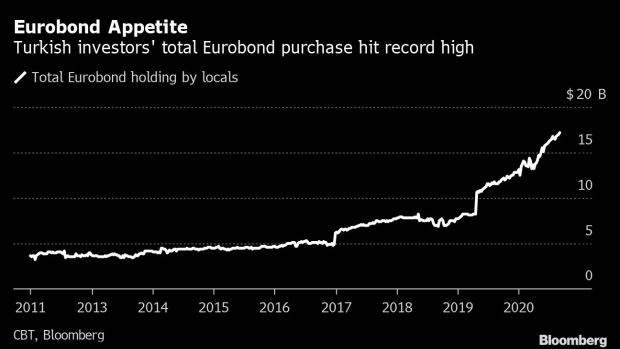 (Bloomberg) -- Turks are more in love with the dollar than ever before.

Households and other retail investors in Turkey have long been saving in the U.S. currency, but now they’re finding newer ways of boosting returns. This year alone, they’ve poured $4 billion into the country’s foreign-currency bonds, taking local ownership to an unprecedented $17.1 billion, according to central bank data.

A combination of the lira’s 21% depreciation this year and negative real rates on local-currency assets is spurring a preference for foreign-currency investments. With average bank deposit rates halving since June 2019 and resurgent inflation erasing real returns, Eurobonds have helped Turks to protect their capital, while offering higher gains than from holding the currency alone.

“People think deposit rates will stay low for a long time and want to take a position in Eurobonds to take advantage of higher yields,” said Onur Ilgen, an Istanbul-based treasury manager at MUFG Bank Turkey AS.

Even though the central bank’s measures have helped to tighten borrowing costs and boosted three-month deposit rates to 11.76%, those returns still fail to compensate investors when consumer-price growth is taken into account.

Average dollar deposit rates at banks are about 1.6%. By contrast, the average yield on a Bloomberg Barclays gauge of Turkish dollar bonds stands at 6.54%, while some corporate bonds offer returns of as high as 7%.

The clamor comes with a caveat. Demand for dollar assets risks entrenching Turkey’s dependence on the U.S. currency, and may be harmful in the long term, according to Murat Salar, the Istanbul-based chief executive officer of Azimut Bosphorus Capital Portfoy.

Turks are increasingly looking for foreign-exchange savings to hedge themselves against an inflation rate that has persistently exceeded the government’s official target of 5%. Deposits reached a record high of $220 billion in August. Now, the growing interest in Eurobonds suggests fewer of them think even dollar accounts offer a reasonable return.

“Some of the money being held in FX deposits is now going to Eurobonds,” said Evren Kirikoglu, an independent market strategist in Istanbul. “It is still limited, but rising interest for Eurobonds is clear. We will probably see that locals will buy more Eurobonds in the future.”

Turkey’s government, companies and banks have a combined $119 billion of Eurobonds outstanding. The securities have returned 17% since early April, according to a Bloomberg-Barclays index.