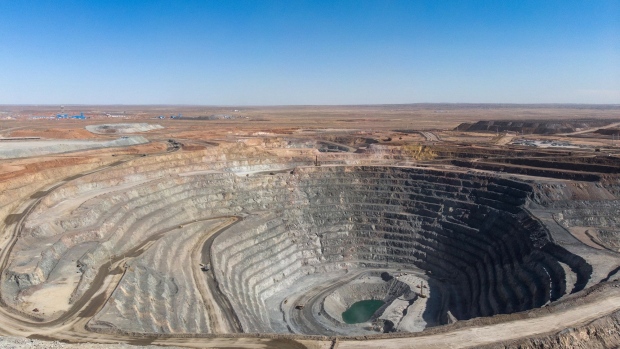 An open pit mine is seen at the Oyu Tolgoi copper-gold mine, jointly owned by Rio Tinto Group's Turquoise Hill Resources Ltd. unit and state-owned Erdenes Oyu Tolgoi LLC, in this aerial photograph taken in Khanbogd, the South Gobi desert, Mongolia, on Saturday, Sept. 22, 2018. Mongolia plans to supply the copper-gold mine with energy by the start of 2019, Mongolian Energy Minister Davaasuren Tserenpil said in interview with newspaper Zasgiin Gazariin Medee. The massive copper-and-gold mine was discovered in 2001 and Rio, the world's second-biggest miner, gained control in 2012. , Bloomberg

Turquoise Hill Resources Ltd. shareholders endorsed a $4.24 billion (US$3.1 billion) takeover offer by Rio Tinto Group, paving the way for the London-based miner to gain control of one of the world’s largest copper mines.

About 60.5 per cent of Turquoise Hill’s minority investors voted in favor of Rio’s $43-a-share cash offer, the Canadian company said following a shareholders’ meeting in Montreal on Friday. The result clears the way for Rio Tinto to take over Turquoise Hill and gain majority ownership in its massive Oyu Tolgoi project in Mongolia, which is expected to become the world’s fourth-largest copper mine.

Shares of Turquoise Hill rose 0.9 per cent to $42.93 at 2:43 p.m. in Toronto. Rio shares closed almost 1 per cent higher in London before the vote results were announced.

“This transaction will deliver significant benefits for all shareholders, and allow us to progress the Oyu Tolgoi project in partnership with the government of Mongolia with a simpler and more efficient governance and ownership structure,” Rio’s copper head Bold Baatar said in a statement.

The takeover required approval from two-thirds of Turquoise Hill investors — including Rio, which holds a 51 per cent stake — as well as a majority of voting minority shareholders. Including Rio’s vote, the arrangement was approved with about 87 per cent support. Turquoise Hill said it expects the transaction to close by Dec. 16, pending court approvals.

The results follow a tumultuous few weeks that saw the shareholder vote postponed three times as Rio worked to bolster support for the deal after two large investors, SailingStone Capital Partners LLC and Pentwater Capital Management LP, balked at the offer. A side deal struck between Rio and the institutional investors in November prompted Quebec’s securities regulator to start investigating, further delaying the process, until the agreement was scrapped and a new meeting date was set.

Turquoise Hill said it received dissent notices representing less than 17.5 per cent of all outstanding shares.

At least one small investor was disappointed by the outcome, arguing that the company is worth more.

“I’m not happy with the number, that’s why I was here,” Chuck Wong said after exiting the meeting in Montreal. “At least it’s settled. It was dragging on and on and on.”