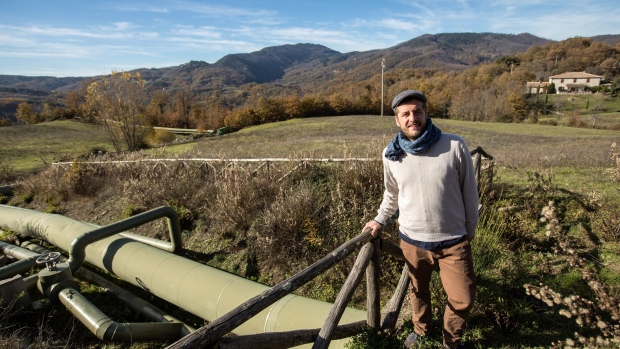 (Bloomberg) -- Italy’s government is dragging its feet on incentives for geothermal power and one local politician has decided to take his protest to the extreme.

Nicola Verruzzi, mayor of a small Tuscan town that runs entirely on geothermal power, says he’s going on a hunger strike to raise awareness about a new strategy that doesn’t include continued incentives for the energy source, which provides about 30 percent of Tuscany’s electricity.

Veruzzi, 35, says he’s yet to receive replies to the dozens of letters he wrote to Economic Development Minister Luigi Di Maio and to Davide Crippa, the undersecretary responsible for energy policy, in protest at the delay in renewing incentives for geothermal production.

The area, dubbed Devil’s Valley because of all the steam, has been in revolt for months after the government declined to include incentives for geothermal production, which transforms steam into power, in its first energy strategy plan, known as FER 1.

Di Maio’s development ministry says it’s still evaluating whether incentives will go into a follow-up decree, FER 2, as Crippa had pledged at the end of last year.

For Verruzzi, a resolution to the issue can’t wait. “If I don’t get a reply to my letters soon I’m taking all the food off my table, to show how cutting incentives would hit our families and our economy,” the mayor said.

Enel SpA, which runs about 30 geothermal plants in the region, would be the most prominent company hit if incentives are discontinued.

While wind and solar energy production have risen steadily in recent years on the back of generous incentives, geothermal has lagged behind, leading some experts to conclude that this source could have strong development potential if supported by a better incentive structure and freed from the red tape that makes setting up plants onerous.

“The economy in the area has been centered on geothermal energy for more than 100 years,” said Domenico Cannistraro, a member of lobby group of Geotermia Si. “This is the first time in three decades we’ll be left without incentives.”

Cannistraro said about a dozen mayors from towns that would be affected if incentives are pulled are ready to head to Rome to pressure Crippa and Di Maio for a meeting. Their protest could escalate into a strike by local companies, he said.

The government has invited leaders of regional authorities and the Italian mayors’ association for talks “in the near future,” according to Crippa.

Discussions will cover geothermal energy and the FER2 plan, said Crippa, a member of the anti-establishment Five Star Movement, which partners the rightist League in the populist government.

A hunger strike “is the wrong approach,” Crippa said, claiming that the mayors’ concerns are linked to the benefits their towns have received from incentives.

“They get royalties which impact their budgets,” Crippa said. “We just want to improve the quality of energy production.”

--With assistance from Giovanni Salzano.

To contact the editors responsible for this story: Alessandra Migliaccio at amigliaccio@bloomberg.net, Jerrold Colten, Ross Larsen