Imports stuck in the Suez Canal could impact Canadian breakfasts

When a handful of teens took to social media to complain about the paltry size of their microwaveable mac and cheese, Big Food was paying attention.

At Kraft Heinz Co., the corporate behemoth that’s responsible for a lot of the items in your pantry right now, a “social listening team” picked up on that chatter in the summer of 2019. Months later—lightning speed in the food world—Kraft Macaroni and Cheese Big Bowls were on store shelves.

Tracking social media buzz is one of the newly honed tools in Kraft’s data collection toolbox, and both the company and its packaged-food peers are increasingly thinking about how they gather and use information like this to speed product development.

From Kraft to General Mills Inc. to Conagra Brands Inc., big foodmakers are finally warming to analytics as they try to become nimbler and more responsive to consumer whims. A pandemic-driven rise in online shopping and grocery delivery has widened the trove of data available to food companies that have long struggled to gain insight into shopping trends because retailers, not manufacturers, have been the gatekeepers to most shopper transactions.

And Big Food isn’t just keeping an eye on Twitter feeds or delivery orders. Some companies are grabbing cell-phone tracking info, scouring customers’ grocery receipts and keeping tabs on how long it takes to clean up dinner. Conagra is even monitoring Peloton subscriptions to gauge whether shoppers would be more inclined to buy health food versus junk food, and tweaking its marketing accordingly.

Data analytics are shaping up to be a critical factor in determining which food companies can thrive in a post-pandemic world. Americans have turned back to old pantry stalwarts over the past year, giving new life to staid brands that had been losing out to smaller competitors. But investors are realizing not everyone can hold onto those gains once the economy opens back up and people eat less at home. Pandemic outperformers like Clorox Co. are facing similar questions about how they’ll fare once things get back to normal.

An S&P index of consumer staples stocks is up about 27 per cent in the past year, the best 12-month performance in that period in over a decade. Yet that pales in comparison to the 63 per cent surge in the broader S&P 500. And foodmakers like Campbell Soup Co. and Kellogg Co. are among the worst performers in that consumer index, which also includes toilet-paper manufacturers, grocery stores and cigarette makers. 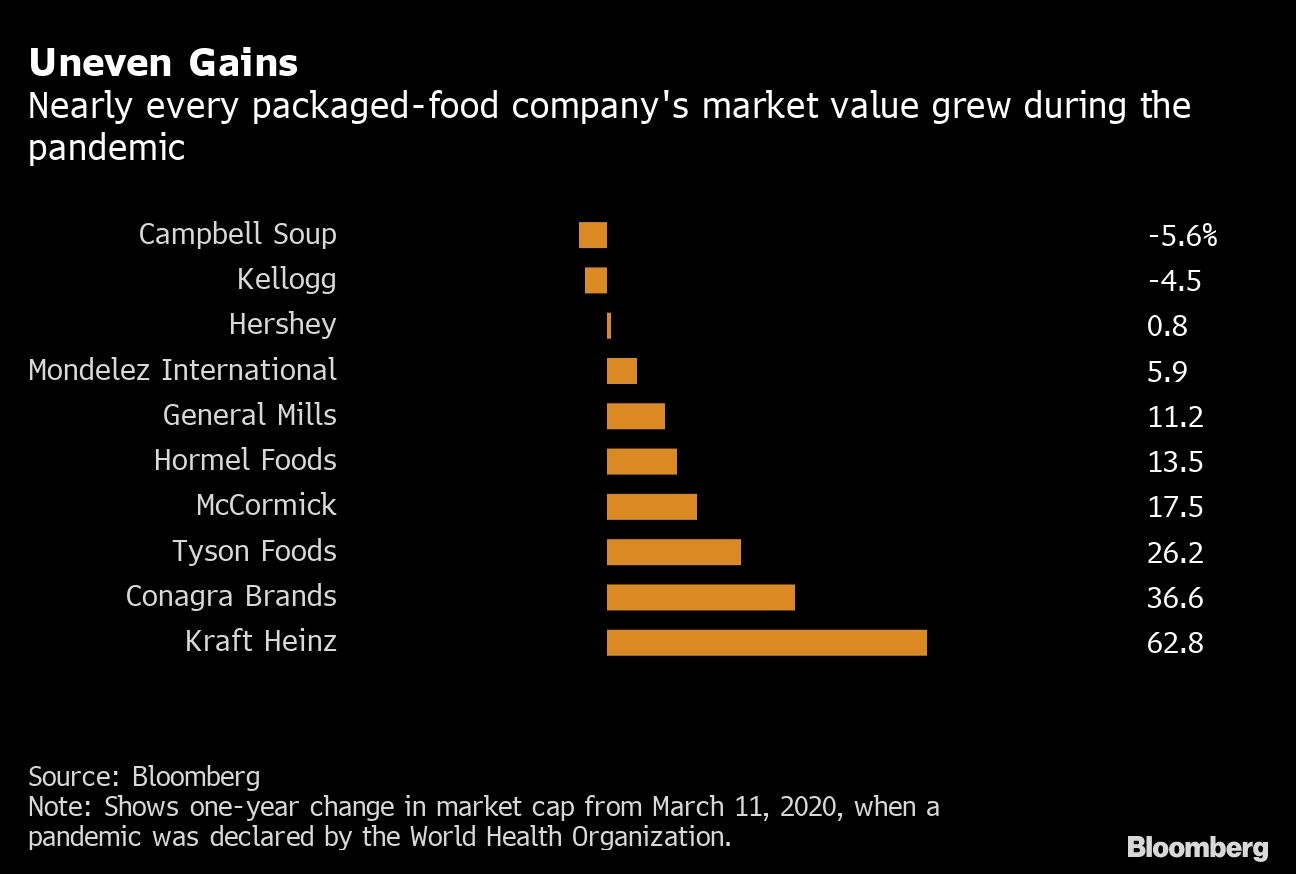 For other industries, the use of analytics is nothing new—everything from banking to health care to retail has been reshaped by user data. But large food manufacturers have been late to the party. With long-established brands like Betty Crocker and Oscar Mayer, market-leading companies have been largely content to drive sales through traditional advertising or simple name recognition.

One obstacle they’ve long faced is in data collection. Since the products are generally sold through grocery stores rather than directly to consumers, food makers have less insight into the details of the transaction, including what other products customers are buying. The largest consumer packaged goods companies have only one-tenth the size of customer databases compared with retail peers, according to Boston Consulting Group’s data.

A rise in delivery and growing direct-to-consumer efforts that accelerated in 2020 have started to shift the balance. The data available through e-commerce is similar in many ways to what supermarket loyalty programs already offered, but it’s now available at a much larger scale and more quickly, explained Bob Nolan, who leads Conagra’s insights and analytics team. Merchants can see what shoppers purchased, what they clicked on but didn’t purchase, what else was in their baskets and what they’ve bought over time.

Manufacturers are also getting more creative in the ways they’re getting information. Besides Peloton subscriptions, Conagra gathers data on recipe searches online and appliance sales to tailor its marketing efforts. Ovens are the second most-used kitchen appliance after stovetops, said Nolan. So when his team saw sheet-pan meals was a popular search on Pinterest, it launched sheet-pan-ready Birds Eye Oven Roasters in six months. When air fryers became hot, the company made videos for social media showing how to make its broccoli bites and cauliflower wings in the device. Conagra has sold US$27 million of oven roasters over the past year.

Food companies “have tried to listen to the consumer and make themselves more relevant in terms of taste and ingredients,” said Nicholas Fereday, a consumer foods analyst at Rabobank. “They are playing in an area that traditionally we assumed the small brands had an upper hand in because they are more socially savvy.”

Kraft’s super-sized mac and cheese shows just how savvy the big players are becoming. The product was developed quickly and is now outperforming internal expectations. Without the kind of social media monitoring that Kraft has been refining, “this could be a multi-year process because you’ve missed your annual planning window,” said U.S. Chief Growth Officer Sanjiv Gajiwala.

The problem isn’t with Campbell specifically, Goldman told Bloomberg in an email. Many companies rely on optimistic consumer surveys that aren’t necessarily reliable in such an uncertain environment.

“Consumers don’t know what they are going to do in a year,” he said. Post-pandemic life is “uncharted waters.”

But while data usage is on the rise, Big Food’s embrace of analytics brings some challenges. At the top of the list: It brings risks of privacy issues for customers, who may not always realize how much information they’re handing over.

In 2019, General Mills altered its Box Tops for Education program in a way that turned it into a significant data collection operation. Rather than clip box tops, shoppers are now directed to upload scans of their grocery receipts to an app, showing the company what else they bought along with the company’s products.

“We’ll have the history of your shopping trips, will understand what products you like,” said North American retail president Jon Nudi. The company can tailor its coupons based on how long since you last purchased a General Mills product—or a competing item. “If we know you like Cheerios but you haven’t bought it, we can serve up a promotion on Cheerios.”

Participants can block out other receipt items if they’d like, the company says. Still, the change has drawn criticism on social media and other sites such as parenting forums on Reddit.

But Big Food isn’t exactly Big Brother, according to Ray Yu, a partner at Boston Consulting Group. The data gathered tends to be aggregated on a macro scale, helping companies identify broader trends, he said.

There’s also no turning back. With the new ways to collect information and the speed at which the market is changing, food manufacturers know they have to embrace data or risk getting left behind.

“The smart companies already have a system for understanding those shifts,” said Becca Brown, CEO of consumer insights firm Uppercase Industries. “If you don’t have a system, it’s time to make one.”