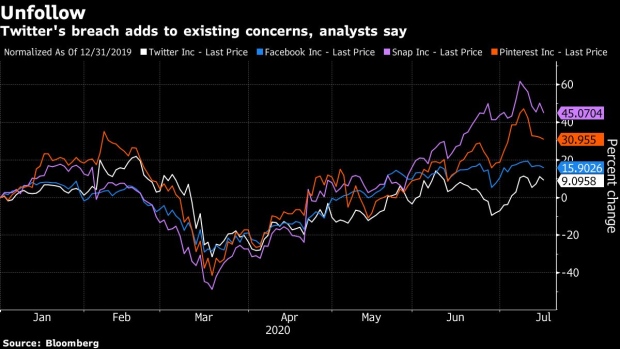 Twitter signage is displayed outside the company's headquarters in San Francisco. , Bloomberg

(Bloomberg) -- Twitter Inc. shares fell on Thursday in the wake of a historic security breach that analysts said raised new and potentially long-term risks for the social-media company.

The hack “adds an extra layer of cost going forward to ensure that such a lapse doesn’t happen again,” said Rohit Kulkarni, an analyst at MKM Partners. “Over the medium term it raises concerns about the safety of users and data, which could manifest into weaker investor sentiment.” MKM has a neutral rating on the stock.

Shares fell as much as 4.7%, though they last traded down less than 2%. While the stock has risen nearly 60% off a March low, shares remain almost 25% below a peak hit in September 2019. Twitter’s 9% climb thus far this year makes it the weakest gainer among its peers; Facebook Inc. is up nearly 16%, while Snap Inc. has climbed more than 45%.

In a phone interview, Kulkarni said the security hack “manifests into an issue of how much users will trust Twitter,” which could represent a headwind to growth. “If such lapses lead to an erosion in trust, that could translate to diminished user growth and engagement, which translates to lower revenue.”

Kevin Rippey, an analyst at Evercore ISI who has an in-line rating on Twitter, told Bloomberg News that he wasn’t concerned about user growth as a result of the breach, but said the company may have to spend more on security issues. This could be a drag on earnings, especially because in April, Twitter said it would lower its expense growth this year.

“The amount of resources that need to be deployed to ensure this doesn’t happen again is a top-of-list concern” for investors, noted Rippey, who said he was looking to the company’s upcoming earnings and conference call for clarity on this issue.

Twitter is expected to report its second-quarter results on July 23.