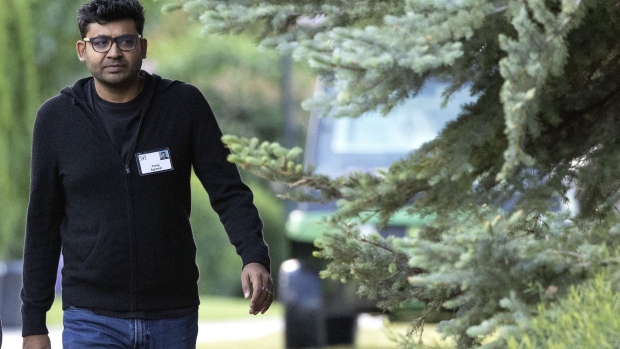 (Bloomberg) -- Elon Musk and Twitter Inc. Chief Executive Officer Parag Agrawal are seeking to reschedule their depositions in the company’s lawsuit over Musk’s $44 billion buyout, according to people familiar with the matter.

Musk and Agrawal were scheduled to sit down for questioning Monday. The billionaire’s deposition was supposed to start at 9:30 a.m. at a law office in Wilmington, Delaware, while Agrawal was due to appear at one in San Francisco, court filings show.

Instead, Agrawal wants to reschedule his session for later this week, while Musk wants his to take place somewhere other than Delaware, according to the people, who asked not to be identified discussing a private subject. Depositions often are rescheduled for the convenience of the parties to a legal dispute and their lawyers.

The lawsuit is set for a five-day trial starting Oct. 17. Delaware Chancery Judge Kathaleen St. J. McCormick must decide whether the world’s richest person had legitimate grounds for walking away from the $54.20-per-share deal.

Each side has fired an intense volley of subpoeanas at the other to elicit testimony and other evidence about the number of bot and spam accounts on the social media platform, among other subjects. Musk claims Twitter deceived him about the quality of the platform’s user base, while the company alleges that is only a pretext for abandoning the deal.

McCormick will hold a hearing Tuesday on several fights over pretrial information exchanges, such as whether Bruce Falck, who oversaw product revenue at Twitter, must sit for a deposition.