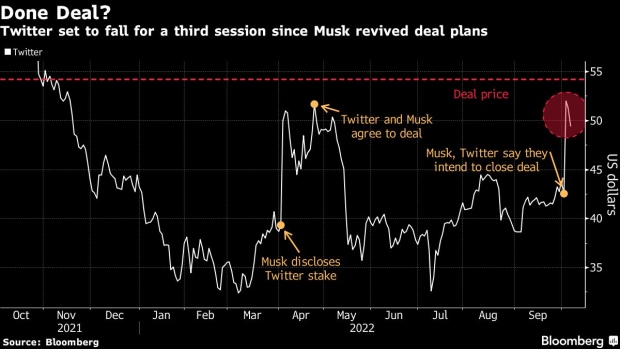 Pedestrians outside Twitter headquarters in San Francisco, California, US, on Thursday, Oct. 6, 2022. Stock markets are still not entirely sold on Elon Musk's $44 billion takeover of Twitter Inc. after the billionaire revived the deal at its original price earlier this week. , Bloomberg

(Bloomberg) -- Twitter Inc. shares extended losses for a third session on Friday, widening the gap between Elon Musk’s $54.20 per share offer as deal talks are said to be stuck over a debt financing contingency.

Shares in the social media firm closed 0.4% lower at $49.18, after slipping as much as 2.5%, as concerns surrounding the transaction’s funding persist. Those uncertainties have kept Twitter’s stock about 9% below the offer price.

The stock is now down for a third day after soaring on Tuesday when Musk made a surprising U-turn from his effort to back out of the deal, potentially avoiding a contentious courtroom fight.

On Oct. 3, the Tesla chief executive officer said his offer is contingent on receiving $13 billion in debt financing. Then on Thursday, Bloomberg reported talks to reach a deal resolution are stalled, in part, on the new contingency, according to people familiar with the matter.

On the same day, a Delaware judge halted a court case against Musk over his takeover of Twitter, giving the parties more time to complete the deal.

(Updates stock moves and the chart at close)