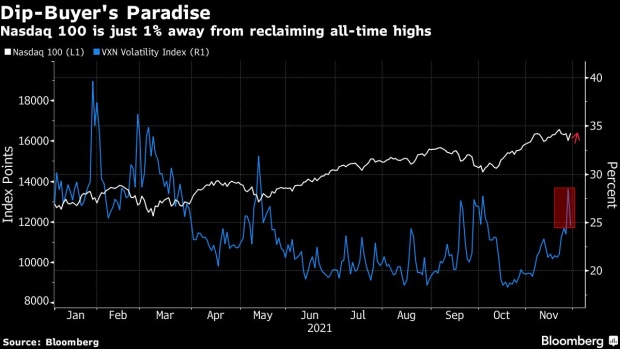 (Bloomberg) -- From Elon Musk’s Tesla Inc. to Reed Hastings’ Netflix Inc., tech firms led by their founder have mostly beaten the broader market by a huge margin. Twitter Inc. has always been an outlier.

Monday’s news that Jack Dorsey is stepping down as chief executive officer of the social media company comes after the stock rose just 63% during the co-founder’s six-year tenure. That’s a far cry from the multi-fold gains in peers such as Facebook-owner Meta Platforms Inc. or Amazon.com Inc. on the NYFANG+ Index. Twitter has also lagged behind the 280% rally for the Nasdaq 100 and the 134% gain in the S&P 500 in that time.

While the likes of Mark Zuckerberg, Bill Gates, Steve Jobs and Jensen Huang were all focused “solely on one thing” -- running the company they started -- Dorsey had fingers in more than one pie, said Jim Dixon, an equity sales trader at Mirabaud Securities.

A key one has been Square Inc., the digital-payments platform he co-founded and continues to serve as chief executive officer. Unlike Twitter, Square has been a stellar performer in recent years, more than tripling in 2020 alone.

Square’s gains are more typical of founder-led companies. An exchange-traded fund of such firms has risen 134% since its inception in Feb. 2017, outstripping a 99% advance for the S&P 500 Index. Square is the fund’s third-best performer in that time with a gain of more than 2,200%.

“Other CEOs, while they may do a good job, aren’t married emotionally to a company the way a founder is,” said Mirabaud’s Dixon.

Trade Desk Inc., owner of a platform for buying digital advertisements run by co-founder Jeff Green, is the biggest gainer on the Global X Founder Run Companies ETF after its shares soared more than 30-fold. Other big winners include cybersecurity company Zscaler Inc. and car-retailer Carvana Inc., both up more than 1,800% since the fund’s 2017 inception.

Tesla, run by Musk, who is also the CEO of Space Exploration Technologies Corp., has jumped more than 2,400% over the same span. Closely held SpaceX hit a valuation of $100 billion with the sale of shares on a secondary market last month.

Expensive software stocks have been hit hard in the past two weeks amid rising U.S. treasury yields and a hedge fund exodus. A Goldman Sachs Group Inc. basket of software companies with an enterprise value exceeding eight times sales has fallen 10% from a Nov. 16 record.

Salesforce.com, with an enterprise value about 13 times trailing revenue, will get a chance to justify its valuation when it reports earnings on Tuesday along with several other software companies later this week. Analysts expect the maker of customer management software to show strong revenue growth as businesses continue to prioritize spending on cloud-based services.

Salesforce’s earnings will be followed by cloud-computing company Snowflake Inc. and cybersecurity firm Okta Inc. on Wednesday and Asana Inc. and DocuSign Inc. on Thursday.