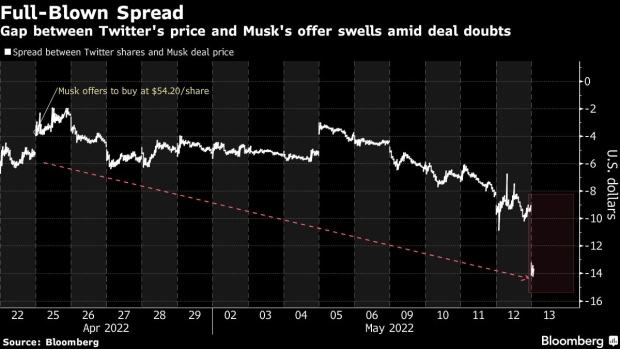 (Bloomberg) -- The deal spread on Elon Musk’s proposed purchase of Twitter Inc. is ballooning Friday to its widest level since deal announcement, after the billionaire sent tweets saying that the takeover is “on hold” but he’s still committed.

The spread, which offers an indication of Wall Street’s belief that the takeover will be completed, jumped to around $13.70 from $9.11 at Thursday’s close. In other words the market increasingly believes Musk is trying to re-price his buyout proposal or even pull out of the transaction.

At current levels, the market is pricing in a roughly 40% probability of the purchase being completed, said Aaron Glick, a merger arbitrage specialist at Cowen & Co, using $30 as Twitter’s downside price, which is which the shares are likely to fall if the deal collapses. Accelerate Financial Technologies Inc. CEO Julian Klymochko also sees 40% odds of the takeover going through.

Investors are “speculating that perhaps Musk is using this as a way to seek a price cut,” Glick said. “However, for investors who have avoided this situation because they don’t trust Musk, this development has justified those views.”

The gap between Twitter’s stock price and Musk’s offer has been growing since May 5 and is more than three times where it was last week when Musk announced a roughly $7.1 billion financing commitment.

The merger arbitrage spread is among the widest of all US pending transactions, according to Bloomberg data. It represents more than 33% gross return if the buyout plan goes through, compared with 9.5% in Nielsen’s take-private deal.

“There are two likely scenarios here. The first and most likely is that Musk is acting strange and eccentric, in line with historic behavior,” Klymochko said in an email. “The second, and less likely scenario, is he could be angling for a price cut. This would be analogous to what LVMH did to Tiffany after the Covid bear market reduced the target’s value.”