Momentum is back in the tech trade: Synovus' Dan Morgan

Twitter Inc. reported second-quarter sales that topped analysts’ estimates, and gave a forecast for the current quarter that exceeded expectations amid global events such as the Olympics that drive advertising. Shares jumped about 5 per cent in extended trading.

Revenue will be from US$1.22 billion to US$1.3 billion in the period ending in September, the San Francisco-based company said Thursday in a statement. Analysts, on average, projected US$1.17 billion, according to data compiled by Bloomberg. Second-quarter sales jumped 74 per cent to US$1.19 billion from a year earlier, compared with analysts’ estimates of US$1.06 billion.

Twitter added 7 million new users in the second quarter from the previous period, bringing the company’s total audience to 206 million daily users. Those numbers were in line with analysts’ estimates. Twitter’s U.S. audience fell 1 million users to 37 million during the period ended June 30.

A year ago, Twitter faced one of its most difficult quarters when many brand advertisers started to pull marketing budgets at the height of the pandemic. The social media company relies on brands for the bulk of its advertising revenue and sales fell 19 per cent in the period from April-June 2020. To broaden its revenue, Twitter started pushing even more aggressively into direct response advertising -- the types of ads that try to drive specific outcomes, like an app install or a website visit.

The numbers suggest the company is growing after a chaotic year that included the pandemic and a U.S. election that ultimately led Twitter to permanently suspend then-President Donald Trump. While brand advertising has bounced back as the global economy reopens, the company remains the target of Trump allies who say the platform discriminates against conservatives.

Twitter shares reached a high of US$76.70 in extended trading after closing at US$69.57. The stock has increased 28 per cent this year. 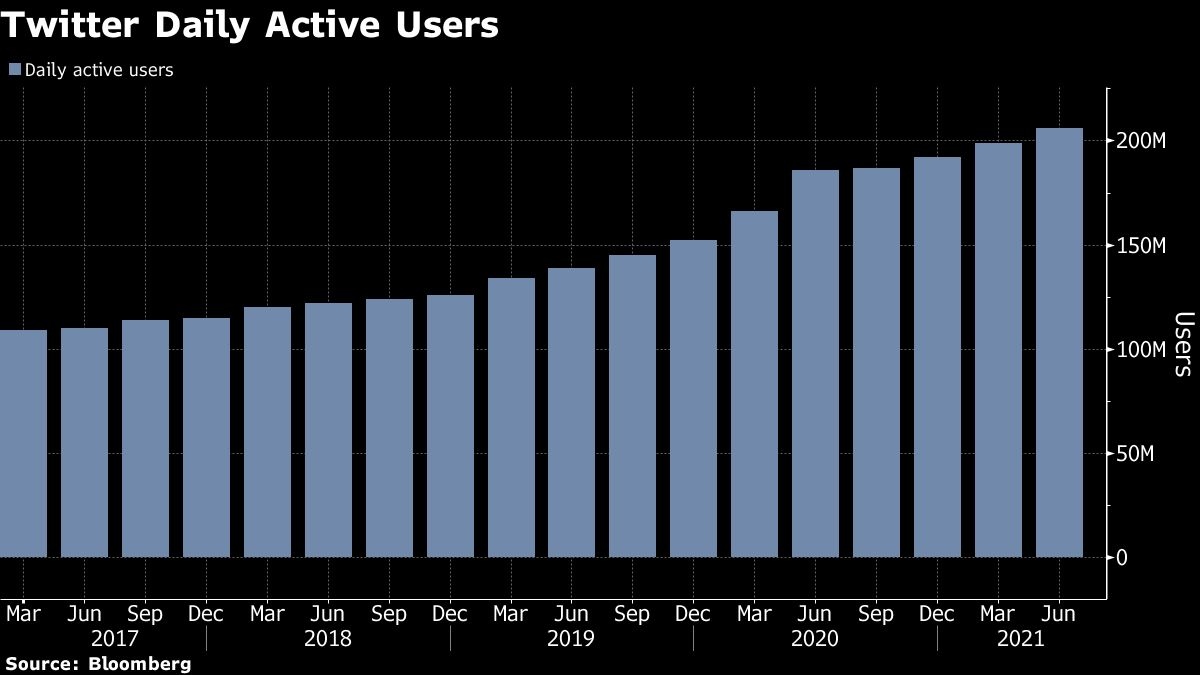 The company’s brand advertising also may help it avoid any major impact from Apple Inc.’s new privacy updates for iOS 14 users, which require that companies get user permission to collect certain data about their online activity. Most users are asking apps not to track them, which is hurting targeted advertising, especially on Facebook.

Twitter, though, says it hasn’t been seriously impacted by the update. “While it is still too early to assess the long-term impact of Apple’s iOS 14.5 changes,” the effect in the second quarter “was lower than expected,” the company wrote in its shareholder letter.

While ad revenue is increasing, Twitter’s share of the global market isn’t expected to grow, a sign of a broader ad industry expansion. Despite the company’s strong quarter and guidance, its global share of the digital advertising market is set to stay at just 0.9 per cent in 2021, according to EMarketer. Facebook, by contrast, will capture an estimated 24 per cent of the global market.

Twitter gave a forecast for operating income in the current quarter of US$50 million to break even and said full-year expenses are expected to increase 30 per cent from a year ago, compared with a previous estimate of 25 per cent growth. Hiring, primarily among product and engineering, the company’s shareholder letter says.