Twitter Inc., the notoriously unfiltered social network that has been called out for doing both too much and not enough to moderate conversations on its service, has entered new territory — at a particularly risky time.

After years of staying on the sidelines as U.S. President Donald Trump pushed falsehoods and questionable information on its social-media service, Twitter on Tuesday took the unprecedented step of publicly refuting two of Trump’s tweets. When Trump posted that mail-in ballots would lead to a “rigged election,” Twitter added a link to his posts that brought users to a page disputing the claim.

“Fact checkers say there is no evidence that mail-in ballots are linked to voter fraud,” the company concluded, citing news stories from CNN and the Washington Post, among others.

It’s a label the company has been experimenting with just in the past few months, including a recent effort to blunt dangerous misinformation on the COVID-19 outbreak and treatments. But the decision to call out Trump, who has more than 80 million followers and is arguably the site’s most important user, may be one of Twitter’s greatest gambles. Five months before the U.S. presidential election in November, the company has suddenly set a fact-checking precedent that may be impossible to enforce. 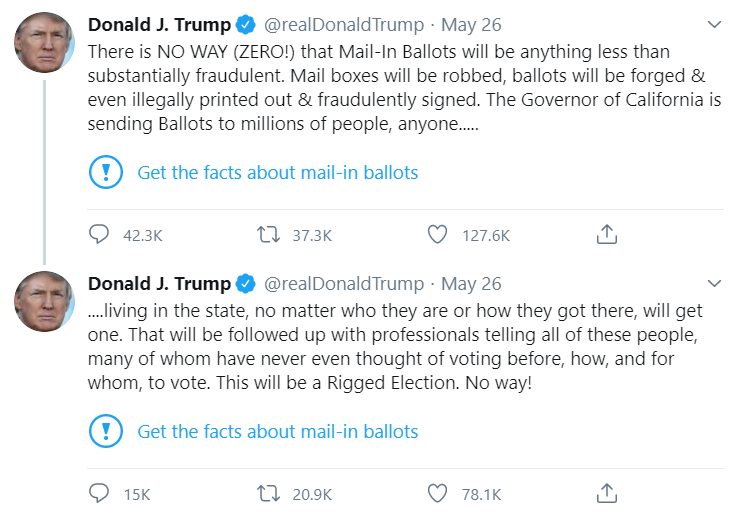 Twitter, which has 166 million daily users, has little experience fact-checking at scale. It doesn’t have an internal team of dedicated fact-checkers — instead such reviews fall to the company’s trust and safety organization, which also enforces all of Twitter’s rules around abuse and harassment.

A company spokesperson said Twitter will “rely on trusted partners to identify” content that should be fact-checked, but declined to name any formal partnerships. Tuesday’s fact-checking decision was carried out entirely by internal teams, according to another company representative.

Twitter didn’t even have a policy against posting misinformation until earlier this year. It added its first misinformation policy around “manipulated media,” a response to some presidential candidates sharing doctored photos and videos, on March 5. Earlier this month Twitter expanded that policy to include misinformation about the coronavirus, and said it would remove posts that posed a direct threat to user safety, but leave up and add labels to other misinformation “where people may still be confused or misled.” Twitter said at the time that it would “explore labeling different types of misleading information” moving forward.

Typically, this recommendation would land on the desk of Twitter’s head of legal and policy, Vijaya Gadde, who is the final say on enforcement decisions. But Gadde is on maternity leave, meaning the recommendation fell to her deputies, VP of Trust and Safety Del Harvey and General Counsel Sean Edgett. Chief Executive Officer Jack Dorsey has historically been removed from decisions around policy enforcement, instead relying on Gadde and her team to make decisions and inform him of what’s coming. Dorsey has not yet tweeted about the Trump fact-check. He also hasn’t responded publicly to a letter from a widower, made public this week, that asked Dorsey to remove Trump’s tweets containing unsubstantiated theories about the death of the man’s wife.

Until Tuesday, Twitter hadn’t labeled any tweets that included voting misinformation. But the company’s previously stated promise to “explore” other types of misinformation categories meant Twitter felt comfortable expanding the policy and labeling Trump’s tweets, according to a spokesperson. The company will continue to add new fact-checking categories over time, he added, but declined to comment on what those will be. To date, Twitter hasn’t fact-checked misinformation related to other topics that promise to be important in the run-up to November’s election – issues like immigration, health care or climate change. The vagueness of the policy leaves open the possibility Twitter could do so at any time.

The company’s policies apply to all users, but Twitter prioritizes tweets that can cause the most harm, a spokesperson said — which means tweets from high-profile users with a lot of followers. As a private company, Twitter and other social media platforms are free to set their own rules about what speech is allowed on their services. Freedom of expression protections apply only to government efforts to restrict speech.

The danger is that Twitter isn’t prepared to fact-check everything posted by Trump, his Democratic rival Joe Biden, or any other elected official. Right now Twitter has only targeted narrow categories of misinformation, though critics of the president will undoubtedly expect the company to police all of his statements moving forward -- something Twitter is ill-equipped to do.

Trump made it clear he thinks Twitter has already gone too far.

“Twitter is completely stifling FREE SPEECH,” he tweeted Tuesday evening. “I, as President, will not allow it to happen!” He followed up on that post with another series of tweets on Wednesday morning threatening to “strongly regulate” or close down social media companies for bias against conservatives — a common argument among Republican politicians and one that a federal appeals court rejected earlier on Wednesday.

Though Trump doesn’t have the power to shut down private companies, the U.S. Justice Department, the Federal Trade Commission and state attorneys general have all started investigating large tech companies for antitrust reasons over the past year. Still, Twitter’s smaller size means it hasn’t been a target of those investigations thus far.

And if the company calls out Trump again? That’s likely to stir up even more intense criticism from Republican politicians. After Tuesday’s fact-checking label, the Trump campaign tweeted a Fox News story that singled out a Twitter employee from the company’s “site integrity” team as the individual who fact-checked Trump. A Twitter spokesperson said the decision was not made by any one individual, but that the employee has received death threats over direct messages and email as a result.

“Twitter has now shown that everything we have been saying about them (and their other compatriots) is correct,” Trump tweeted Wednesday. “Big action to follow!”