Adaptation is the answer to Big Tech 'sovereignty', not regulating against it: GZERO Media president

Twitter said Apple’s privacy tracking changes, which require users to opt in to data sharing, will have an ongoing “modest” impact on sales. Rivals Facebook Inc. and Snap Inc. earlier reported that the software changes dented their business because they made it harder to measure an ad’s effectiveness.

“It is still too early for Twitter to assess the long-term impact of Apple’s privacy-related iOS changes, but the Q3 revenue impact was lower than expected,” the San Francisco-based company wrote Tuesday in a letter to shareholders. Sales gained 37 per cent to US$1.28 billion. “Ad engagements,” or the number of user interactions with paid messages, increased 6 per cent from a year earlier. Twitter, unlike Facebook, makes most of its money from brand advertising, which requires less personal targeting and is measured more broadly.

Twitter said it had 211 million daily users in the third quarter, 5 million more than the previous period and a 13 per cent increase from a year earlier. The social media service attributed the growth to “ongoing product improvements and global conversations around current events.” 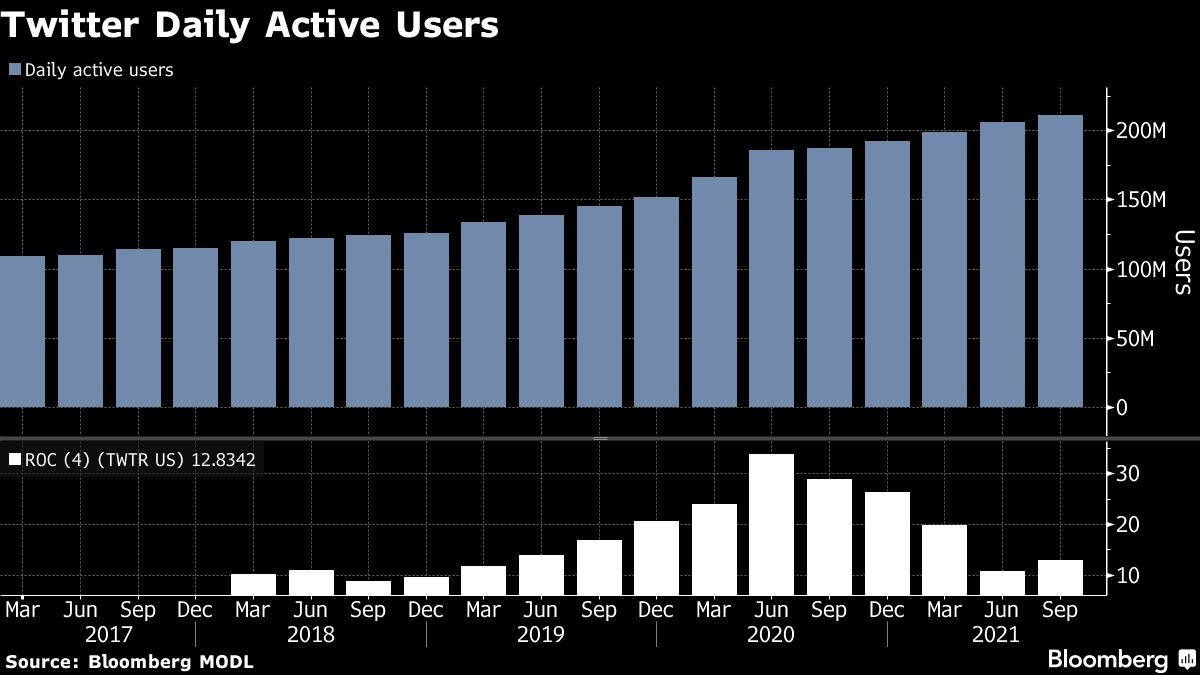 The results show that Twitter, which expanded last year thanks to a contentious U.S. election and interest in the global pandemic, has been able to maintain steady growth since. While competitors like Snap and Facebook are struggling to adjust to Apple’s changes, some aspects of Twitter’s advertising business that may have seemed like a weakness earlier this year -- such as its reliance on brand advertising -- may suddenly be an asset.

Chief Financial Officer Ned Segal said the company is watching global supply chain issues “closely,” but suggested they may be “less of an issue” for Twitter given how advertisers use the platform.

“Well more than half of ad revenue on Twitter is for services and digital goods,” he said. “Some of the largest advertisers in the world who sell products and services, often the campaigns you see on Twitter from these advertisers are for their services.”

Snap said last week that supply chain shortages would hurt its fourth-quarter revenue because businesses are reluctant to promote products they can’t produce or fulfill.

Twitter projected that revenue in the current quarter will be US$1.5 billion to US$1.6 billion. Analysts, on average, estimated US$1.58 billion, according to data compiled by Bloomberg.

The company expects its user base to grow “at or above” the third-quarter rate during the holiday period, according to the shareholder letter. Operating income will be US$130 million to US$180 million.

Shares gained about 2.5 per cent in extended trading after closing at US$61.43 in New York. The stock has gained 13 per cent this year.

The company reported a third-quarter net loss of US$536.8 million, or 67 cents a share, compared with net income of US$28.7 million, or 4 cents a share, in the quarter a year earlier. The loss included a one-time litigation-related charge of US$766 million resulting from the settlement of lawsuits, including a shareholder class action suit that had accused Twitter of painting an overly optimistic picture of its future in 2014.

Twitter also said it wouldn’t recoup an estimated US$200 million to US$250 million revenue loss in 2022 from the sale of MoPub, the company’s advertising platform, while it shifts employees to new tasks. Twitter earlier this month said it would sell MoPub to AppLovin Corp. for US$1.05 billion in cash. The company said Tuesday that it expects the deal to close in the first quarter.

The company’s shareholder letter was silent on the progress of Twitter Blue, a new subscription offering. Twitter is pushing into subscriptions as a way to diversify its sales. About 90 per cent of the company’s revenue is generated by advertising.