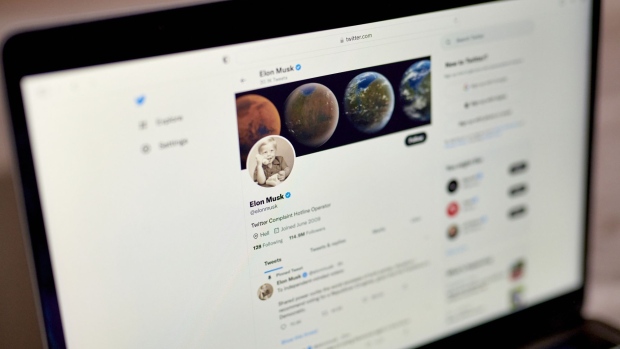 A blue verification check on the page of Elon Musk, co-founder and chief executive officer of Space Exploration Technologies Corp. (SpaceX) and Tesla Inc., on a laptop computer arranged in the Brooklyn borough of New York, US, on Monday, Nov. 7, 2022. Elon Musk’s agreement to buy Twitter Inc. is sending some users searching for alternative platforms — with mixed success. Photographer: Gabby Jones/Bloomberg , Bloomberg

(Bloomberg) -- Some users who opted not to see Twitter Inc. owner Elon Musk’s tweets are saying the blocks they placed on his account have spontaneously lifted.

Users like Steve Bowler and shan horan tweeted this week alleging that Musk had been unblocked. Meanwhile, Nazih Fares said the new Twitter owner was also no longer muted -- a less severe constraint where a user can opt not to see tweets from the muted account. That would mean the digital barriers that users chose to put between themselves and Musk’s content are being stripped away on the app without their consent.

An account can use the block function to restrict another from seeing their tweets, following or contacting the user. Muting someone like Musk means their posts won’t show up in your feed. Both are important tools for users to tamp down on harassment from people or bots on the platform. They empower users with more control over the sort of content they see when they open up Twitter.

The company didn’t immediately respond to a request for comment.

Blocked or muted accounts are likely to receive less engagement as other users opt out of seeing their content -- whereas Musk is keen to promote more engagement and interaction at a time when advertisers are dubious about having their brands associated with his platform.

Unlike most chief executive officers of large tech companies, Musk frequently takes to the app to share details about the business, poll users about features and goof around with memes and jokes at the expense of anyone critical of his management.

Musk, who has said he doesn’t believe in permanently banning accounts, also moved earlier this week to suspend users who had impersonated his Twitter handle, including comedian Kathy Griffin and former NFL player Chris Kluwe.