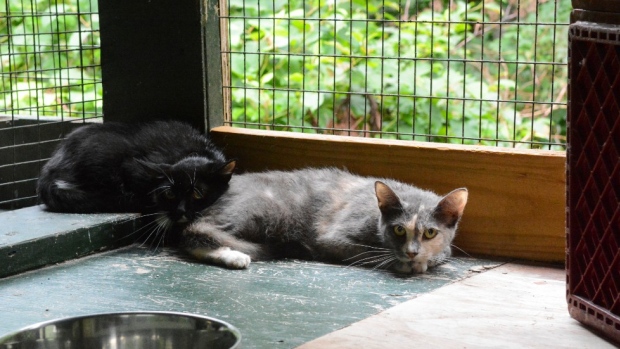 Two cats, which were rescued along with 42 others from a home Saturday, lie in the outdoor cat patio of the cat house at Hillside SPCA in Pottsville, Pa., Tuesday, Aug. 4, 2020. Hillside SPCA took 30 of the cats and Ruth Steinert Memorial SPCA in Pine Grove took 14 of the cats. , Republican-Herald via AP/Lindsey Shuey

The first reported finding of human-to-cat coronavirus transmission in the U.K. has prompted a call from scientists to monitor the infection in pets.

There’s no evidence that domestic cats are playing a role in spreading the pandemic virus, researchers at the University of Glasgow said Wednesday in a study released ahead of peer review and publication. The two infected felines described in the paper developed “mild or severe respiratory disease,” with one four-month-old female Ragdoll kitten having to be put down, they said.

Farmed mink, a tiger in the Bronx zoo, pet dogs and other animals have caught COVID-19, raising concern that a new reservoir for the virus might emerge. Better understanding of how efficiently the pathogen passes from humans to cats will require pets in affected households to be monitored, according to the researchers.

The true frequency of human-to-animal transmission is probably underestimated since few pets get tested, they said.

So-called reverse zoonotic transmission, whereby a pathogen of animal origin is passed from a human back to an animal, “represents a relatively low risk” as long as the virus is in high circulation among people, the researchers said. But as epidemics eventually wane, prospects for transmission among animals become “increasingly important as a source for re-introductions to humans.”

Whether infected cats could naturally transmit the virus to other animals, or back to humans, remains unknown.